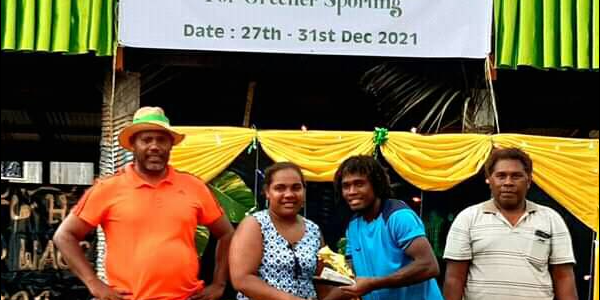 Youngster helps team to win West Are Are games

Junior Fordney has stamped in his name in the West Are Are Christmas tournament after winning the golden boot award and helping his team Kiu United FC to claim victory.

The Central Coast football club elastic forward received his award during the prize presentation ceremony over the weekend.

He scored a total of 8 goals during the tournament.

He told Star Sports yesterday, that he was glad to receive the award.

“I was really glad indeed to be awarded the golden boot award. Indeed during our matches during the tournament I’ve been trying all my best to perform in a standard that is exceptional in terms of searching for goals.

“Receiving this award has proven my hard work and determination as a footballer,” he said.

He added, the award has given him more confidence and challenge to train harder to compete again and defend the title in West Are’Are tournament this coming Christmas.

With the award now under his belt, Fordney said all credits must go back to where it’s due.

“I would like to thank my team mates from Kiu United FC for their great effort in sportsmanship until we claim the victory. It’s like a dream come true.

“After so many years back our teams does not receive such victory as a champion, thank God for that.

“Taking this golden boot award under my belt and to help my team claim the West Are Are tournament trophy is the only thing on my shoulder to fight for especially my team and my community,” Fordney concluded.