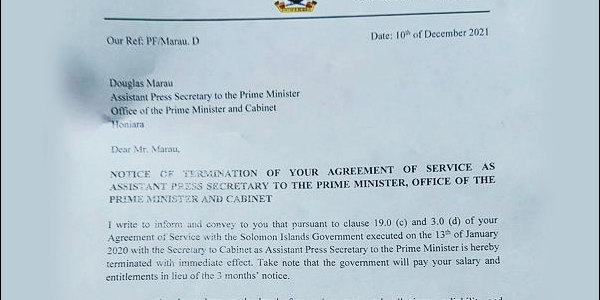 Douglas Marau and Alex Akwai were axed from their job, the Prime Minister Office revealed.

Their premature dismissal were issued yesterday although their contract still remains valid.

Mr. Marau yesterday in a social media post said that he was officially handed his termination.

“Today (yesterday) I was officially handed my termination letter as deputy press secretary to Prime Minister. This is the second time I am terminated from this position,” he said.

According to his termination letter it stated that an assessment has been done on the level of commitment to work, allegiance, reliability and performance in the Press Office, the government regrets to inform him that his services are no longer required.

However, Mr. Marau was bit disappointed with his superiors on the approach to his termination.

“Today (yesterday), upon receiving my letter dated December 10 2021, it is unfortunate that none of my bosses have the guts to hand over my original letter and explain my termination, although I already read the minutes and the crap, they wrote to remove me.

“Well, I understand their intention not to consult me and give me the option to resign but opted to terminate me the second time to discredit my reputation.

“But despite all this, I take this opportunity to thank the Prime Minister for giving me the opportunity to serve you and the Government and people of Solomon Islands.

“I have done my best. At least, I have left behind a landmark project for the Government to reintroduce the ‘gavman toktok’ newspaper you requested and many more.

“I have served three Prime Ministers and one Opposition Leader in the past nine years in the political office and I know my termination stemmed out of jealousy and hatred. But, I humbly walkout with my heads high and accept this with greatest humility and looking forward to a prosperous 2022,” he said.

In the case of Akwai, Solomon Star yesterday also attempted to get comments from him but he was out of reach.