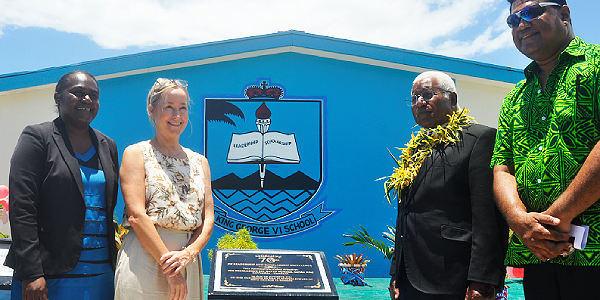 FORMER and current students of King George VI school staged a colourful float parade from Commonwealth Street to the school as they celebrated the 70th Anniversary Platinum jubilee, Saturday.

Leading the float parade was the police motorcade followed by more than 20 floats featuring divisional classes from 1952-2022.

Amongst the leaders who took part in the float parade were the Speaker of Parliament, Sir Patteson Oti, Minister of Traditional Governance, Samuel Manetoali and TSI Chief Executive Officer, Ruth Liloqula.

Speaking to this paper, Sir Patteson said celebrating the 70th Platinum Jubilee of the school was significant for him.

He said the event celebrates the values and contributions of the school in shaping the leaders in various professions to where it is today.

He said talking from the context where many former King George VI students are now, he realised the immense contribution that the school has contributed to shaping the country.

“We appreciate the value the school has done for us,” he said.

Sir Patteson said in his reflection said that at first, his perception about education was all about going into the classes while teachers came in and teach day in and day out without realising what the school has done for him.

“Looking back, I am here where I am now because of the contribution of the school in shaping my perception and my understanding of what education is about.

“Education is not about you finishing school and that’s it. No, it is the value of what it is in shaping perceptions of how one views or looks at issues,” he added.

He said for the past 70 years, the school has produced leaders who have served the country.

Minister of Tradition Governance Samuel Manetoali recalls that KGVI school has brought him in a way to serve the country.

He said when he attended the school from 1982-1987, the main activities he was involved in were piggery and playing soccer.

At one stage he was the goalkeeper of the premier team of the school.

He said seeing everyone attend the 70th Anniversary was significant and maintain the Unity and Peace in the country.

He urged the school to continue produce good citizen, leaders and maintain peace and unity in the country.

“We highly disciplined, uniforms were strictly worn. There was no public transport and we had to walk back. They inspected our rooms every morning, leadership was there. During our time, jobs were readily available and scholarship was awarded on merit.”