Four adults lucky to be alive in fatal Sunday accident 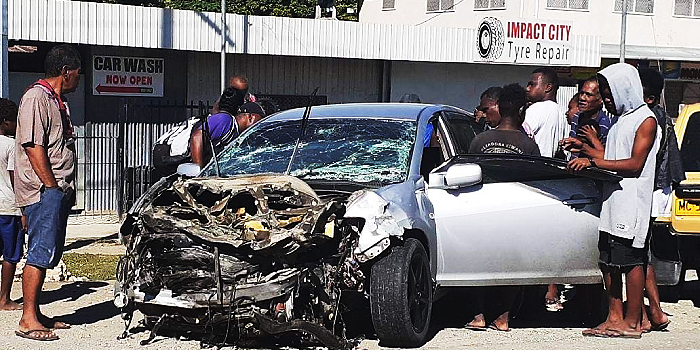 FOUR adults were lucky to be alive in an accident on Sunday at White River, western end of the city.

The crash, involving a Caldina and a Harrier, occurred at the intersection of White River 01 and 02 bus stops between 8 am and 8:30 am, according to the Kukum Police Traffic Department.

Speaking to the Solomon Star at the scene a bystander said the Caldina was travelling the westerly direction, while the Harrier was travelling east toward the City.

“A lone female was the driver of the Caldina, while the Harrier was carrying the driver and two other men,” the eye-witness said.

She added, two people were taken to the National Referral Hospital (NRH).

“The female driver and a male both in their 30s, were rushed to the hospital for medical attention.”

The duo, were taken to National Referral Hospital where they were treated for non-life-threatening injuries.

They are reported to be in a stable condition as confirmed by the NRH Accident & Emergency department to this paper.

According to the police, the driver of the Harrier escaped from the scene after the accident.

It is still unclear whether alcohol is the cause of the accident.