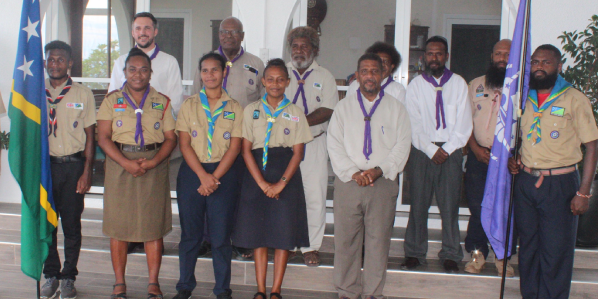 The British High Commissioner to the Solomon Islands and Nauru, H.E Thomas Coward was appointed as International Commissioner.

Shona, a local Artist and a graduate in Tourism Hospitality, was inducted into her role with the Asia Pacific Regional Office in Manilla last year and will now continue her work in the Solomon Islands Scout Association.

Frank Samui of Temotu Province is a legal counsel, appointed as the Provincial Commissioner responsible for development of Temotu provincial Scout Branch. This is the second appointment of provincial branches after Western Province took up the first initiative to re-establish Scouting in the provincial centres.

“Scouting membership as of December 2021 is 525 inclusive of young people and adults. We want to double our growth and provide more attractive programs to the young people across the Solomon Islands. We are still convinced and believe that scouting has a place in the processes of our children and young people’s development.”

“I have been in this Scouts for over 30 years. I know the huge value that being in the scouts can have for young people. It can help kids learn, develop and grow.”

“My immediate task now is to ensure that our numbers grow annually by reaching out to young people in our communities and schools across the country to join the Scout movement. I know it will be challenging but we are getting there when we work together.”

The appointments were approved by the Scouts Council and signed by His Excellency the Governor General and Chief Scout of Solomon Islands Sir David Vunagi.