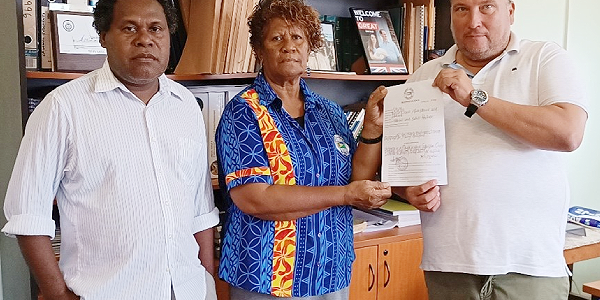 PACIFIC Nickel Mines (SI) Ltd – the Australian mining company developing the world-class nickel deposit on Isabel – has scored the big one by obtaining the business licence for the multi-million-dollar project from the Isabel Provincial Government.

The grant of the licence capped off what has been a hard but successful run for Pacific Nickel in meeting pre-requisite requirements for the mining operation on its Kolosori tenement in West Bugotu.

Obtaining the business licence now paves the way for Pacific Nickel to carry out its mining activities there. The Company has already obtained its Mining Licence from the Mines and Minerals Board.

“I am really excited because in obtaining the Business Licence, the Company has succeeded in fulfilling its legal obligation to the Isabel Provincial Government, its people and the Solomon Islands government as a whole,” Mr Misiec told Solomon Star this week.

“I can only attribute the success to our board of directors, the Management and our field staff who have worked tirelessly to reach this point,” he said.

“The Board of Directors understands the Company’s legal obligation in this matter and has worked very hard with the Management to get the Business Licence from the Isabel Provincial Government. Now that we have the licence, our next move is to develop supporting infrastructure facilities such as road access, an overseas wharf to cater for bulk carriers that would ship the nickel ores overseas and so on,” he said.

The Company plans its first shipment of nickel ore by mid-year next year.

Mr Misiec also acknowledged the role of Premier Sikilabu and her government in the company’s development.

“She and her team have been exemplary in ensuring economic development in Isabel Province continues unimpeded,” Mr Misiec said.

“All I can say is that it would be a very busy time ahead for all of us.”

It is understood Pacific Nickel Mines (SI) Ltd has been holding discussions with Glencore PLC – one of the world’s largest globally diversified natural resource companies – as it does with others.

A team from Glencore visited the Kolosori tenement on West Isabel three weeks ago. Glencore plc is a Swiss multinational commodity trading and mining company with headquarters in Baar, Switzerland. It is not clear whether a deal has been struck with Glencore.

Glencore’s oil and gas head office is in London and its registered office is in Saint Helier, Jersey. The current company was created through a merger of Glencore with Xstrata on 2 May 2013, according to Wikipedia

In 2021, Glencore’s revenue stood at USD203.8 billion with total assets valued at USD127.5 billion. The company employs some 135, 000 workers, according to published figures. One of its subsidiaries is the Mount Isa Mine in far north Central Queensland, Australia.