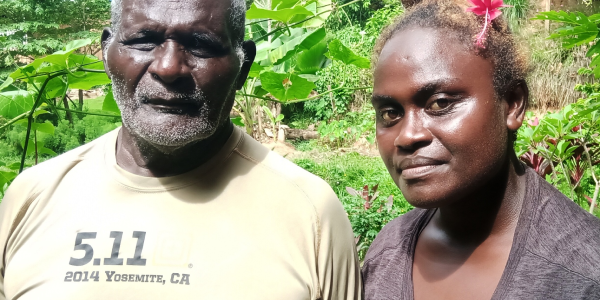 MONDAY May 9th 2022 was just another ordinary day for this 65 year old man from Bougainville in Papua New Guinea (PNG) who normally goes out to do what he love so much – fishing.

Navala Banei Kuka is being dubbed ‘an old salt’ because for as long as his legs would carry him, he would walk, swam the sea and paddled far out to sea in search of his favourite fish – snapper.

The native of Sirovai village in Central Bougainville was alone on that trip traveling in his outboard motor (OBM) when Members of the Royal Solomon Islands Police Force (RSIPF) Police Response Team (PRT) patrolling the border between Boungainville and Shortlands at that time apprehended him, saying lapun Kuka went too far with his fishing lines.

Since then he was transported to Shortlands and to Gizo where he had served his term in jail.

After serving two months for breaching SOPE, he was finally released last Wednesday 31st August, much to the excitement of his family.

He was accused of breaching the State of Public Emergency (SoPE) that has been enforced during the COVID-19 outbreak.

Forward Commander at the Western border Superintendent Wilken Miriki at that time said; “A combine patrol team of the RSIPF Police Response Team (PRT) intercepted a 19 foot bray boat powered with a 15 horse powered engine floating between Ovau Island and Oema Atoll around 10am on 9 May 2022.”

He was arrested at Nunuari or the Pigeon Island where he was detained in Shortlands before being transported to Gizo.

Nunuari is about 5km off the coastline of Sirovai and Koromira and a traditional fishing ground for locals because it is under the Solomon Islands territory.

After arriving in Gizo, he spent two weeks in isolation under quarantine. Despite repeated swabbing tests, he tested negative.

After completing his quarantine, he was remanded and placed under policy custody for more than a month.

And it was in 22 June that he was sentenced to five months jail.

However, the court had taken into account the time he was remanded, the quarantine period and his health, thus, his five months jail term was suspended to only two months.

As a result he was released early last week from Gizo Correctional Centre.

Speaking exclusively to the Solomon Star over the weekend, Mr Kuka said, he was glad to be finally released from jail.

“I’m very happy to be out of jail after serving my term,” he said.

One of his daughters arrived in Gizo from Honiara on Monday and managed to take care of him.

Kuka is married to a local lady from Choiseul Province therefore, he is not new to Solomons.

Because he had been traveling back and forth between Solomons and Bougainville.

Both his daughter are currently residing with relatives in Gizo while waiting to return home.

Although he was transported by RSIPF to face justice in Gizo around May, this time around, he was left alone to find his own back to his own country.

He claimed, when he approached Gizo Police to get him over to Shortlands, he was told their stabi crafts are currently facing mechanical issues.

Two of the stabi crafts are currently berthing at Gizo.

He also question, who should be responsible for his repatriation because as an outsider he needs support to back in Shortlands to pick up his outboard motor before he can travel home.

However, he told the paper that he is glad to be finally out and reunited with some of his family members in Gizo.

His immediate wish is to be reunited with his own people in Bougainville.

Mr Kuka, a dedicated Christian said, he had made a lot of friends while at the Gizo Correctional Centre.

He said, each day, he would pray and share God’s word with other inmates.

He recalled that he had faced a number of challenges while inside the cell because its crowded, poor ventilation and the food is not so good given his ill-health.

The current flu also affected many of the inmates inside the cell, he said.

However, he had thanked the Police and Correctional Centre management for taking care of him.’

His children and relatives have been worried about him since his arrest given his old age and health status.

However, they are excited because he is now safe and ready to be reunited with them.

Kuka had acknowledged God for His guidance, protection and leading while he was in serving his term.