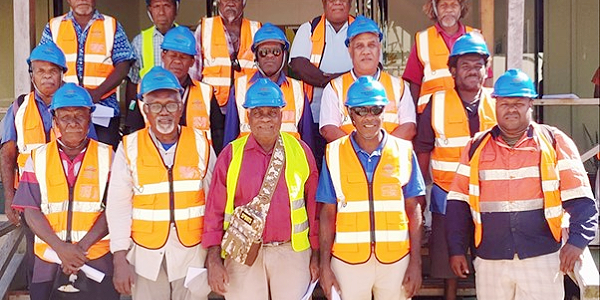 It was reported that in 2015, the GCIL bought the St. Barbara abandoned gold mine after heavy downpour and flash flooding washed away the bridge connecting Honiara and the mine site.

According to Benjamin Afuga St. Barbara left, and claimed they abandoned the mine under the forced majeure clause in the mining agreement.

“After some tug of war with the Government and help by landowners St. Barbara Board members and Executive management returned after the Government relaxed restrictions it has imposed earlier,” he said.

Mr Afuga said after meeting the Government, landowners and other stakeholders, offered the mine to the GCIL, an investment company owned by landowners of Gold Ridge.

GCIL Chairman Walton Naezon they have bought the company for just $100 Australian dollars and owned the mine 100 percent.

“It was a tough journey but we pushed our way through. We met Richard Gu of AXF Resources and offloaded 90%. Later Richard introduced GCIL to Mr Mingqing of Wanguo, a Hong Kong listed mining Company which is the majority shareholder, and GCIL remains with 10 percent.

“We want to thank Mr Gao for having confidence on us and committed yourself during the past six and half years until today (yesterday)”, GCIL Chairman told Mr Gao.

The GCIL Directors took a visit around the mine site, and had visited the heap leach site, Crushing system site, the 16KV Power House, Ball Mill, Flotation processing plant and filter press workshop.

The company management then updated the Directors on project updates, project outstanding issues and a speech from the Wanguo International Mining company and GRML Board Chairman.

Mr Gao has thanked the GCIL Directors for their vision and foresight.

The Directors thanked Mr. Gao and company management for the progress and impressed with the recovery rates and production updates.

Mr Afuga said landowners will be benefited from royalties, Community Development projects and assistances and other benefits specified in the mining agreements between SIG and the company.

“These agreements were signed in 1996 and followed by a subsidiary agreement in 2006,” Mr Afuga said.