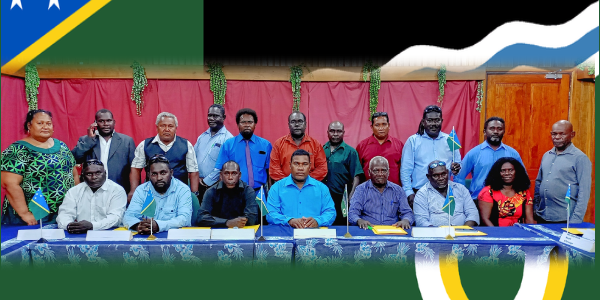 It was during this time that the motion was moved by the Provincial Member for Ward 2 of Inner-shortland Islands and later put to a vote.

Premier David Gina as well as eight (8) Executive members were not present during the meeting, which however did not have any effect on the tabled motion and it was allowed to continue.

Aside from one member abstaining to make a vote out of the 18 who attended the assembly, 17 other present casted a clear ‘yes’ to the motion that came up against no dispute due to 8 absentees and therefore was granted after its due process of the Motion.

Nominations for a new premier was opened, and a closed door election is to be held today, as directed by the Provincial Standing Orders.

The Western Province Government as dictated by Standing Order 115 is now under the Acting leadership of the Deputy Premier to maintain current services only.

Meanwhile, the Motion of No Confidence voted against the Premier of Western Province on Monday may possibly be deemed null if a pending court decision is made, and in turn would work against the WP Assembly (WPA) having been convened, it was revealed yesterday.

This followed a court application submitted to the High Court after a notice circulated by the Office of the Speaker on Saturday the 27th of November was not adhered to by 18 members of the Western Assembly.

The circulated notice sighted by the paper and addressed to all Provincial Members of the WPA stated that due to a court application submitted by the Minister of Ministry of Provincial Government and Institutional Strengthening (MPGIS) to the High Court, and the WPA meeting should not be allowed to convene until further notice.

It stated that the Minister of MPGIS was ‘seeking an order to set aside the Court Orders and, for the Minister to make a new ministerial order for the Assembly meeting.’

The notice continued to say that the Court’s ruling on the Minister’s application to set aside was not yet received by the office of the Western Province Assembly Speaker due to the public disorder and disturbance in Honiara on Wednesday 24th November.

The circumstances caused the High Court to close it’s doors and the ruling on the Minister’s application could not delivered at 2pm on Wednesday – 24th of November 2021.

Because of this it was explained that if the assembly meeting convened on Monday the 29th, it would be seen as acting subjudice considering the court ruling on the Minister’s application was yet to be delivered.

Further correspondence by Premier David Gina revealed that amongst other issues raised, there was no budget available to convene an assembly meeting and that the meeting in September had exhausted the budget.

Nevertheless, a meeting was held on Monday and a Motion of No Confidence was conducted whereby Hon. David Gina was voted out of his Premiership, however this may possibly be ruled as null, leaving Premier Gina still in power.

Speaking to the WPA Speaker he explained as stated in his notice, that the Assembly meeting date of 29th November was set by himself and recognized and endorsed by the court.

It was on that note that he had then issued the advance notice under Standing Order 62 that the Assembly meeting set down for 29th November as adjourned due to unforeseen circumstances which made it impossible to convene Assembly.