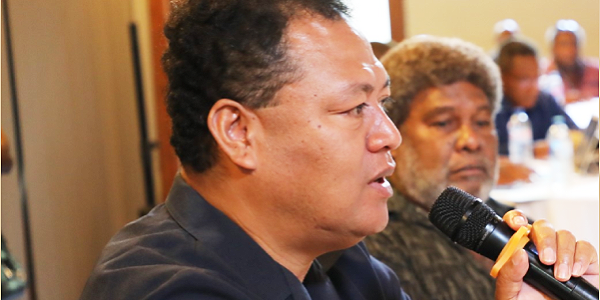 In a statement on Tuesday, Mr Forau said the desire for more autonomy has transpired to be the obvious among the many reasons as to why the bigger provinces in Solomon Islands have conducted their behavior in the manner that is of no secret to anyone anymore.

“The National Government including all our National Leaders need to wake up to the call that resonates and echoes among the voices and noises that is proceeding out from the actions that have unfortunately victimized all other provinces and the national economy.

“Let us advance what is right and just for all Solomon Islands Citizens irrespective of which province one may come from. If the current system of governance is to be blamed for the injustice caused by a few and experienced by everybody, let us discover a new form of governance,” he said.

Mr Forau added, “we already have the final draft of our federal constitution and the onus is now on our National Government Leaders to pass it in the parliament.

“I believe the time is now right for the national government to complete the necessary procedural formalities to enable the draft Federal Constitution to be debated and passed in Parliament.

“This current Parliament should not deny the wishes of the people for more autonomy in order to decide for themselves on matters prudent for their advancement/development,” the Temotu Premier said.

He also wishes to condemn in the strongest terms the rioting and the looting that took place in Honiara last week.

“Those actions are unnecessary and uncalled for. There is no amount of blame and reasoning good enough to justify the damages to properties and even the loss of lives as a result of the event.”

To target a business section of our community that supports the country’s economy, Forau said this is even more damaging to our already struggling economy.

He said, the event of last week will have a long term unfortunate consequences as follows;

“Every citizens of Solomon Islands including our leaders need to understand that we are a nation only because of our laws.

“That is why nobody should take the law into his/her own hands. The result of doing so would be lawlessness and the nation begins the journey of falling apart.”

The former Minister for Foreign Affairs & External Trade concluded that “When the law ceases to be obeyed and exists, our nation will also cease to exist. Simply put, NO LAW = NO NATION.”