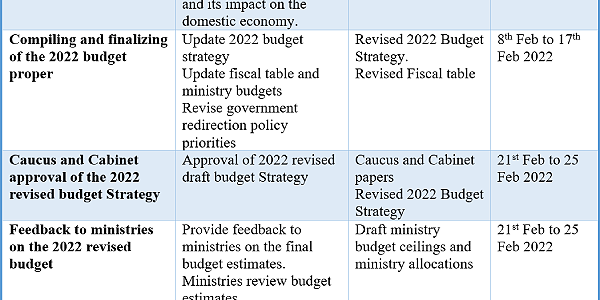 FACED with a massive economic recovery challenge, the Government has been forced to revise its timetable for the preparation and delivery of its 2022 Budget.

Initially, the $4 billion budget was to have been brought down in March, but this has now been put back by a month to April 4, according to the Timetable, which has been circulated to all Government departments and other stakeholders.

Solomon Star has obtained a copy of the new Timetable.

Among other things, the Timetable sets out what it described as “Major milestones, Activities. Deliverables and Deadlines.”

Debate on the Budget is expected to start on 4th April when Parliament is due to meet, unless there are further changes to the Timetable.

According to the Timetable, the Public Accounts Committee [PAC] will begin scrutinizing the Draft Budget from 14 March through to the 1st of April. Budget documents were due to be delivered to Parliament between 4th and 11th March.

The Government hopes to have the Budget proper in operation by 18th to 28th April or on 29th to 30 April this year.

Insiders said the government is having a hard time in ensuring the figures in the Budget are balanced out. According to a separate report, the government is yet to find $400 million for its development budget.

As well, the Ministry of Finance and Treasury has been asked to justify increases in revenue projections for the 2022 financial year. There are substantial increases being projected for the Inland Revenue Division (IRD), Customs and Other Charges.

It is not clear whether these outstanding issues have been resolved as preparations of the 2022 Budget continue.