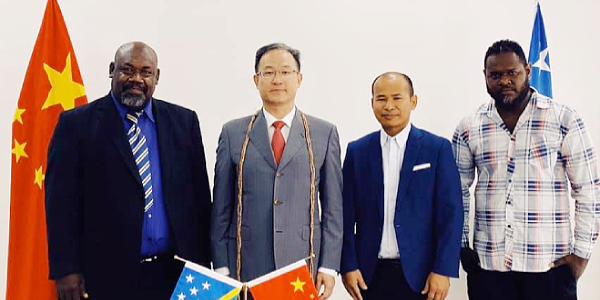 A historical sister-relation agreement between Guadalcanal Province (Solomon Islands) and Guangdong Province in Guangzhou (People’s Republic of China) was signed by the Guadalcanal Premier Hon. Francis Sade at the Chinese Embassy in Honiara at 10 am, Thursday morning.

The sister-relation is the first of its kind in the country after Solomon Islands had switched ties from Taiwan to China in September, 2019.
The two sides agree to make concerted efforts, on the basis of equality and mutual benefits, to promote people-to-people friendly contacts and economic and trade interflow, and actively carry out exchanges and cooperation in the fields of infrastructure, agriculture, fishery, culture, sports, health, education, personnel etc.
In his opening remarks, the Chinese Ambassador, H.E. Li Ming welcomed and congratulated Premier Sade and his Executive government for the bold step to sign the historical sister-relation.
“It is a great honor and privilege to have signed this milestone agreement in the history of cooperation. I have the honor and privilege to invite Hon. Premier Sade and your government to sign the MOU between Guangdong Province and Guadalcanal Province, the two G-Provinces, for broader cooperation.
“This relationship is now solemnly established between the two provinces after we signed the Joint Communiqué on the Establishment of Diplomatic Relations between the People’s Republic of China and Solomon Islands. It is a role model for both of our countries to follow.
“We will continue to facilitate the relations based on mutual understandings and cooperation in accordance with both of our national governments’ friendships” H.E. Li Ming stated.
In addition, H.E. Li Ming highlighted that China and Solomon Islands relations has resulted in great achievements, especially the COVID-19 prevention and control.
With the MOU now signed, Ambassador Li Ming said that he is positive that the Guangdong Provincial Government will work closely with Guadalcanal Province to support each other on the key aforementioned areas.
In response, Hon. Premier Sade then thanked H.E. Li Ming for facilitating the first formalities between the two sister provinces. He also conveyed his congratulatory remarks to the Governor of Guangdong Province, Ma Xingrui for the milestone achievement.
“I would like to thank you, your Excellency Mr. Li Ming for facilitating this milestone achievement. Please kindly convey my profound thanks and congratulations to my new friend, Governor Ma Xingrui and the people of Guangdong Province for this great achievement.
“My new friend, Governor Ma Xingrui and I, are recommitting and renewing this old friendship between these two provinces in accordance with the principles of the Joint Communiqué. Guadalcanal Province is the largest province in the Solomon Islands; therefore, in order to fulfil some of its development aspirations, we need to have these kinds of sisters or state-to-state relations” Premier Francis Sade stated.
In hindsight, Guadalcanal Province and Guangdong Province had been friends since the mid-1980s.
Guadalcanal Province had benefited from the friendship through agriculture and transportation, especially the ‘GG Venture’ ship. The friendship at that time was on an ad-hoc basis.
Between 2011-2014, the former Guadalcanal Premier, Anthony Veke, re-pursued the friendship on mutual grounds.
Then in 2018, he formed a formal Guadalcanal-Guangdong Friendship Association (GGFA) with Guangdong Province. He is still the current President of GGFA.
Under this MOU, two Guadalcanal Province fishery officers then visited Guangdong Provincial Vocational School of Oceanographic Engineering to learn about aquaculture techniques, product processing and fisheries management for three weeks.
Additionally, in the same year, a high level delegation from ‘Guangdong People’s Association for Friendship with Foreign Countries’ (GPFAFC) visited two farms; the Popo Rice farm in Malango (Central Guadalcanal) and the Dukuna Casava farm at GPPOL 1.
As a result, Premier Francis Sade also acknowledged his predecessors for their efforts in keeping the sister-relations going during his short remarks today.

In conclusion, Premier Sade stated “I am therefore optimistic that my people of Guadalcanal Province will surely benefit from this new direction between our two provinces on the basis of equality and mutual benefits through the aforementioned sectors.”