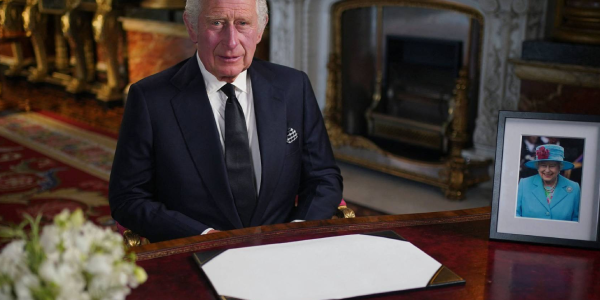 His Excellency the Governor General yesterday officially read to the nation the Proclamation from Buckingham Palace on the Ascension to the Throne of His Majesty King Charles III.

With that Declaration His Majesty King Charles III is officially the Head of State for Solomon Islands.

After 1 pm today, all flags will return to half-mast again until after burial on Monday 19th September

Following the death of Elizabeth II on Thursday, her eldest child, Charles, automatically became monarch. As sovereign, he has chosen to take the name King Charles III.

All rights and responsibilities of the Crown now rest with King Charles III.

He becomes head of state not just in the UK but in 14 other Commonwealth realms including Australia and Canada.

He now becomes head of the 56-member Commonwealth, although that is not a hereditary position, after his succession to the role was agreed by Commonwealth leaders at a meeting in London in 2018.

He has become head of the British Armed Forces, the judiciary and the civil service, and he is the Supreme Governor of the Church of England.

He is the Fount of Honour, which means all honors, such as knighthoods, will now be given in his name.

It was revealed that Charles has also adopted the symbolic position as Head of Nation, meaning he becomes the symbol of national identity, unity, and pride.

He represents continuity and celebrates excellence on behalf of the country. That’s why we see the monarch opening national events and leading commemorations.

All the official royal residences including Buckingham Palace and Windsor Castle will now be under his control.

There are also other residences such as Balmoral in Scotland and Sandringham in Norfolk which the Queen owned privately — and the nation will have to see to whom she leaves them in her will.

Either way, Charles’ wealth has ballooned. He will now receive the Sovereign Grant, which covers the cost of his official duties and amounted to £86.3 million ($99.2 million) for the 2021/2022 financial year.

He will take charge of the Royal Collection, which includes one of the most valuable art collections in the world.

He also picks up the Duchy of Lancaster, a vast estate of more than 10,000 hectares of land, prime London real estate and a portfolio of investments.

King Charles III has become one of the richest men in England overnight.

As he takes on the leadership role lets congratulate him on being appointed to the highest position.

With the country now in a mourning period, lets also honour the late Queen.

The Commonwealth family will miss her.

Rt Hon Patricia Scotland KC, Secretary-General, Commonwealth of Nations said, Her Majesty was an extraordinary person, who lived an extraordinary life: a constant presence and example for each of us, guiding and serving us all for as long as any of us can remember.

Throughout her reign, and seven decades of extraordinary change and challenge, Her Majesty was the epitome of duty, stability, wisdom and grace.

Her long years of interaction and partnership with generations of world leaders and their people, particularly the young, gave her extraordinary insight, which brought ever-more life and meaning to her service.

Hers was a life of service which will echo through the ages. We will be forever grateful.