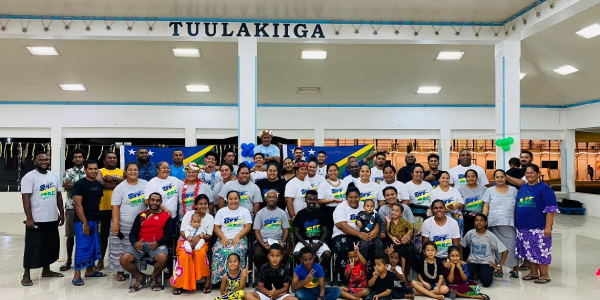 HISTORY was created after the Solomon Islands community in Tuvalu commemorated the 44th Independence Day for the first time on Thursday 7th July 2022 at Funafuti.

Reports reaching the paper said, the community known as the ‘SoloValu’ came together to commemorate the event in style.

The theme for their event was; “Iumi together for a stronger and peaceful Solomon Islands.”

Susana Kausea President of SoloValu said, the community consists of Solomon Islanders who marry Tuvaluans, expats who work in Tuvalu and local Tuvaluans with links to the Solomon Islands.

Among those who joined the celebration is the chief guest the Honourable Justice Sir John Muria who is currently the Resident High Court Judge of Tuvalu, she said.

Ms Kausea said, the day began with a flag raising ceremony at 6am in the morning and closed off with formal dinner celebration in the evening.

“Although this is the first time for the community to formally celebrate the Independence Day, the turn out and support was beyond our expectation and we are just humbled and thankful for the support we received not only from the Solomon Islanders but also from the local Tuvaluans and our Melanesian brothers and sisters from PNG, Vanuatu and Fiji,” she said.

She added that as Solomon Islanders living away from home they will always acknowledge their roots no matter where they are.

“This year in particular we are reminded of the challenges facing our home in the recent past and with the Independence theme “Iumi together for a stronger and peaceful Solomon Islands”.

“Therefore, we decided to also come together from afar to celebrate unity and peace and to show our people back home that we are also together with you in building a stronger and peaceful Solomon Islands.

“If we remember that we are the Hapi Isles, we should be on a way to a better future.

“With that, we thank everyone back home and around the world for the Independence celebrations and we pray that we will all continue to hold hands in building back our Hapi Isles,” she said.

A local Tristein Zutu from Western Province marrying to a Tuvalu lady said, there are more than ten families with Solomons’ connection living and working in Tuvalu.
“Including children the number is more than 20 altogether,” he said.

He said most of the locals are working for the Tuvaluan government with some working as private.

Mr Zutu who works with the Tuvalu Trade Office said, there are Tuvaluans who have been brought up in Solomon Islands that supported the Solomons community.

He said, its good to see the number of the local community slowly expanding in Funafuti.

“Such event has enabled us to come together and spend time together to celebrate this important day of our nation.”

Like Ms Kausea, he also thanked the wantok community including Vanuatu, Fiji and Papua New Guinea (PNG) for gracing and supporting the program.

Mr Zutu said, the event was a colourful one filled with entertainment, sharing of stories and an evening dinner.

One of the longest serving Solomon Islanders living in Tuvalu, Tony Kwato’o who is Malaita part Choiseul also took time to speak. During the speech he acknowledged everyone for their time and effort to be part of the special occasion in ensuring the event was a success.

With the event being successful, it is now expected to be an annual one and they are looking forward to another similar event next year.