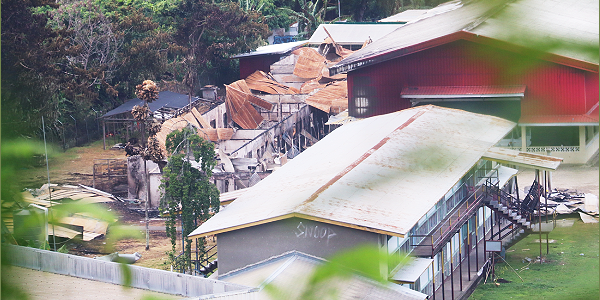 HONIARA Senior High School has been down on its knees when some significants buildings were burnt down on 24th Wednesday’s night by the angry rioters and looters.

Honiara High School is owned by the Honiara City Council (HCC) and one of the pioneer schools in the country.

It has survived some passed riots until some of the buildings were burnt down by criminals and hooligans last week.

In an interview, the Head of Mathematics department, Timothy Anilafa said he was in tears to learn that the school was attacked and its main infrastructures burnt.

“Sad to say that Honiara Senior High School is down on its knee,” he said.

Anilafa who is also the Tutor for Form 6 and Form 7 Mathematics said it was a sudden thing to happen.

“We were in tears to learn our school was burnt down and we feel sorry for what had happened.

He said it has gone through a lot of transition of school’s name until it is currently called Honiara Senior High School.

“It serves and produces a lot of leaders in our country,” he said.

Mr Anilafa added, he didn’t expect such incident to happen to the school.

“One of my deepest regrets when I arrived at the school is to see the Administration Office block burnt down, including the principal’s office.

“The office is where all the sport equipment and trophies for the school are stored,” he said.

He said the school has been known for sports like soccer.

He further added that the school has produced good number of soccer, rugby and netball, athletes, hockey players.

The school has produced good players in the country, the likes of Bejamin Totori, Henry Fa’arodo Junior, Timothy Pauka just to name a few.

“The trophies that sport students have won for the school have also been burnt into ashes,” he said.

He said school is not a profitable institution; but only produce students to become leaders for this nation.

Anilafa also condemns the action of arson and the rioters and looters who burnt the school should be guilty.

“Those who do the arson should be guilty of what they have done to the school,” he said.

He said the instigators of the peaceful-demonstrate-protest should look ahead before staging the protest because most people who were part of the protest were not well-educated and they easily resorted to riot and looting activities.