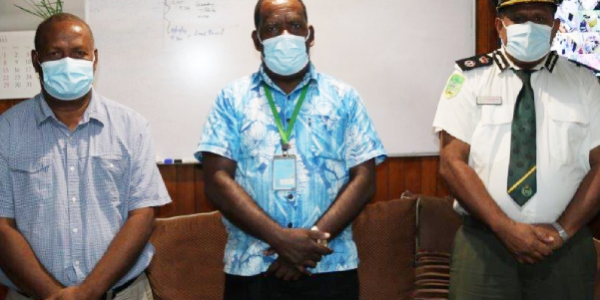 A CSSI statement said the meeting was to sign a Memorandum of Agreement (MOA) between CSSI and HCC concerning the engagement of inmate’s community work program.

“This comes under the Yellow Ribbon Project programs to rehabilitate inmates to become assets of this nation Solomon Islands,” the statement said.

The MOA was an initiative suggested by the Ministry of Infrastructure permanent secretary Stephen Maesiola following a meeting with Mr Manelusi last month.

Mr Denni thanked Commissioner Manelusi for the great initiative to involve low profile inmates in community work program in Honiara City boundary, as part of their rehabilitation and reintegration process.

“Honiara City Council executive will be part of this program after formalising the Memorandum of Agreement,” Mr Denni said.

Mr Gaza said this is a very good proportion and HCC has a lot of small jobs available in the heart of Honiara City.

Commissioner Manelusi thanked the clerk, works manager and the HCC executive for their support to CSSI’s initiative to implement the community work programs for the inmates which is expected to start by the third or fourth quarter of this year 2022.

Police monitor situation leading up to no confidence motion against Suidani
February 6, 2023