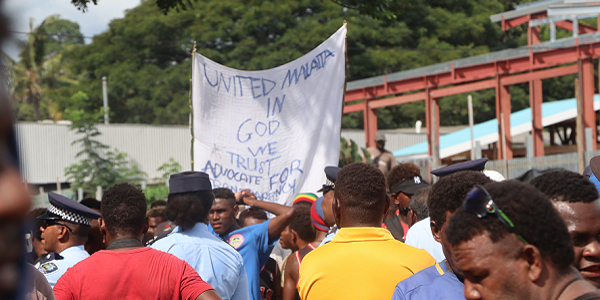 THE long shadow of fear which gripped Honiara prior to the outbreak of the so-called ethnic tension some two decades ago returned on Monday as a group demanding the resignation of Prime Minister Manasseh Sogavare stood firm on their demand.

Members of the group, numbering in their hundreds assembled in various parts of the city, including the Kukum Soccer pitch.

Witnesses said the crowd spilled into the roads down to the Kukum Traffic Police station.

There were similar gatherings in White River as well as in various parts of the city.

As a result, shops, government offices and the COVID-19 field hospital in Chinatown, among others closed down for fear of a riot. One hotel locked up its gate while staff monitor the situation.

While the situation had calmed down, there were concerns that trouble could flare-up anytime.

The Solomon Star was on the ground and witnessed few Malaitan leaders and members of the Solomon Islands Police Force tried to calm the whole situation.

Calming the crowd Knoxley Atu told the Malaitans gathered on Monday at Kukum to allow them to follow the right process.

He showed the letter containing the petition and request for a peaceful march in line of the 14 days’ notice.

The letter showed that 8, 210 Malaitans in Honiara signed the petition but Atu said the letter was questioned by Prime Minister’s Office because it does not have proper address as contact person.

“Therefore I include some of the names including myself as the responsible person to be contacted by PMO and this letter will also include additional signatures which was signed yesterday and today,” Atu said.

The letter was also copied to the Governor General’s Office, RSIPF, Lord Mayor and Leader of the Opposition.

It also stated that they are of the strong belief that DCGA government is not serving the interest of Malaita Province and Solomon Islands and this is evident in the following manner.

Some commentators told the Solomon Star that the government led by Sogavare must be very careful in addressing these issues because it’s not only the Malaitans who wants to see DCGA must change or step out from leadership.

“The government must start and listen to the ordinary citizens,” one commentator said yesterday.

Meanwhile, the Malaitans leaders controlling the crowd yesterday must be praised for their leadership to calm the crowd who most of them a youths.