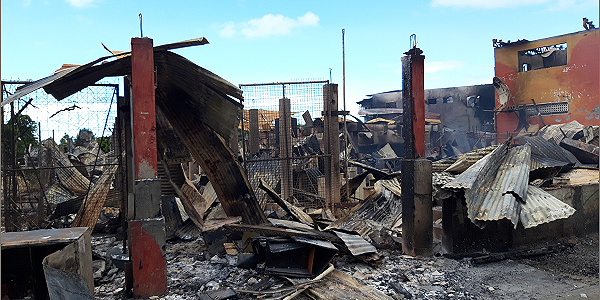 A long time ethnic Chinese businessman has expressed disgust at the looting and destruction of his Chinatown family home and shop last week.

“Our generation has nothing to do with politics here. All we have been doing is to provide a service which has been appreciated by many over the years. Our premises were never touched during the 2000 armed takeover of the government.

“We were also saved during the 2006 riots and looting that year. But this one was different. The rioters simply came and destroyed everything before they set my family home and shop on fire,” he said with a dry laugh.

“My family and I are left with nothing except the clothes we escaped in. And yet, we really had nothing to do with politics here,” the man who is now sheltering with a friend, told Solomon Star yesterday.

He said just because he was Chinese is no reason for the way the young people who took part in the riot had looted his home.

“It was a heartbreaking experience for us. We have called Solomon Islands home for many, many years. For the young people to turn against us the way they did is simply too much to take in, let alone understand,” the man who did not wish to be identified said.

The man said he and his family are traumatised and to them nothing has made sense.

It is understood that nearly 500 Chinese nationals who operated a business in Honiara prior to the rioting, looting and destruction of properties in Chinatown have registered to return to China.

QQQ Wholesale, one of the oldest shops in Chinatown was also burned to the ground.

Chinese shops and businesses were not the only ones that suffered from the unrest. Businesses owned by other nationalities, including those owned and operated by Solomon Islands nationals have also been razed to the ground.

The Central Bank of Solomon Islands (CBSI) assessment on the cost of the damage of the riot on the local economy is extensive and estimated to have reached $534 million, up from the $227 million initially estimated.

Losses to the government in the form of various taxes are being assessed and are certain to be in millions of dollars.