LOOTING AND DESTRUCTION OF PROPERTIES CONTINUE 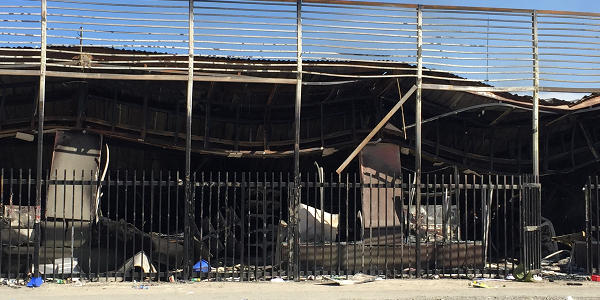 LOOTING and destruction of properties continued for the third day running in Honiara as rioters apply pressure on Prime Minister Manasseh Sogavare to resign.

In their latest act of defiance, the leaf house used by police providing security at Mr. Sogavare’s private residence at Lunga, east Honiara, went up in flame. Rioters reportedly forced their way into the compound of Mr. Sogavare’s $3 million home and torched the leaf hut.

Overwhelmed by sheer numbers, police reportedly retreated. But they managed to save the main residence, which Mr. Sogavare bought in the early 80s.

Rioting, looting and destruction of innocent business houses simply continued unabated. Most of the shops that were looted and later set on fire belonged to Chinese.

As the trouble entered its third day, there does not seem to be an end in sight. This morning a large hardware shop which sells chainsaws, brush cutters and other tools were ransacked and later set on fire.

Looters helped themselves to the contents of the large tool shop – carrying chainsaws, brush cutters, and whatever tools they could lay their hands on. A branch of the Papua New Guinea-owned Bank South Pacific just next door was torched to the ground on Thursday evening.

Australian police and Defence Force personnel arrived last night, but their presence is yet to be felt on the streets of Honiara which now have the appearance of a war zone.

Debris consisting of large boulders, old car wrecks, large sawn wood and so on were thrown onto the road as local police fought pitch battles in a number of locations across Honiara.

Looters, which include children as young as six or seven years old joined young girls and older women, seen carrying foodstuffs and other wares they were able to get from burning shops and other stores in suburban shops in Kukum, Ranadi and Chinatown.

On the main road to the airport – from the Capital Park in the east to Panatina Plaza in the west – large crowds headed further west towards the centre of town. In some areas, young men could be seen brandishing brush knives, apparently stolen from shops they had looted and set on fire earlier.

Others held iron rods, wood and other implements, brandishing them in the air. There was hardly fear of the police.

There is hope the presence of Australian police and defence force personnel that arrived last night might bring about a stop in the uprising which now ranked worse than the two previously – one in June 2000 and again in 2006.

An estimated 29 police officers and some 40 Australian Defence Force personnel reportedly arrived last night. More are said to be on the way

The extent of damages and the impact on the economy from those the events of 2000 and 2006 were felt for years afterwards. The devastation and the cost from this one is expected to be deep and long lasting, given that the country is already struggling from the impact of the COVID-19 pandemic.

Mr. Sogavare has shown little inclination to step down – a key trigger in the initial rioting. His refusal to step down could keep the rioting going for days to come.

Whatever the outcome, the damage has already been done. Thousands of Solomon Islands nationals are set to be without jobs as a direct result of the November 2021 rioting and looting.