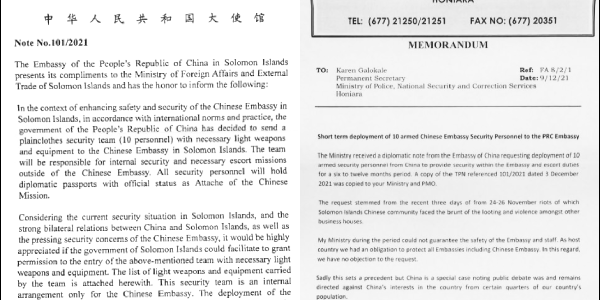 New group within public service pops in the anti-China campaign

The group has also issued a veiled warning to Prime Minister Manasseh Sogavare, saying if he wants to remain in office, “you cannot stand by and let your trusted Permanent Secretaries give control of Solomon Islands to the Chinese.”

The group also challenged the Prime Minister to make the right decision.

Solomon Star has perused the so-called demand letter and there was nothing of the sort. Instead, it was simply a Dip Note (Diplomatic Note) whose contents are consistent with the requirements of each other’s obligations in terms of the diplomatic relations between Solomon Islands and China.

The Dip Note was written in December last year following the rioting, looting and burning a month earlier. It reflected the unease the Chinese Embassy had felt for the safety of its staff at the time and property at the time.

In its letter, Public Servants for Transparency said Solomon Islanders need to know the truth: China has more control of the Ministries than our Prime Minister. The full text of the letter is produced below

“Chinese military weapons and ammunitions (NOT REPLICA) were allowed into our country by two senior public servants Karen Galokale and Colin Beck. Both are rotten to the core and have betrayed our nation to the Chinese.

Galokale’s Ministry has politically lied to Solomon Islands by stating there are no guns and ordered the Royal Solomon Islands Police Force (RSIPF) to go along with these lies.

Would our PM do nothing if he knew they were working behind his back and threatening his authority?

Does Sogavare know about the secret Chinese shipment in the logging vessel GUO RUI? Who knows what is in the Chinese military transport aircraft flying here?

Who knows what we can expect once the Solomon Islands China Security Agreement is signed. Galokale and Beck know.

“We have supporters all over government that have similar stories to tell. Prime Minister if you want to remain in control of our country, you cannot stand by and let your trusted Permanent Secretaries give control of Solomon Islands to the Chinese.

The next decision is yours Prime Minister – will you make the right one? “

But in a statement yesterday, the Government has cautioned the public to be alert against fake news or misinterpreted commentaries on social media forums.

This caution was made following leaked documents containing official correspondences between the Solomon Islands Government and the Peoples Republic of China (PRC) Embassy in Honiara.

“There is nothing to be concerned about,” the Government further stated.

It is anticipated that more fear mongering, lies and propaganda will be forthcoming from people who are hell bent on creating instability for their own interests.

The Government encourages social media commentators not to be emotionally swayed by the leaked documents as clarifications are forthcoming in an official statement.