Makira and Malaita crowned U14 champs 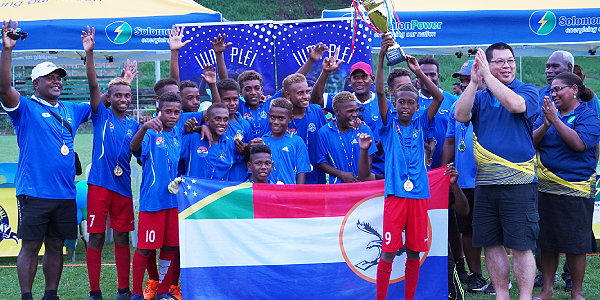 MAKIRA Ulawa U14 girls and Malaita U14 boys are the champions of the Solomon Power Iumi Plei U14 National Championship.

Makira Ulawa U14 girls defended the title as the 2022 champions after defeating Guadalcanal U14 girls 2-0 in the girls’ grand finale at Lawson Tama Stadium on Saturday.

Two first half goals and impressive defensive play in the second half was enough for Makira Ulawa to seal victory.

Malaita U14 girls won the third and fourth playoff defeating Honiara U14 girls in penalty shootouts.

The boy’s category has a new champion, Malaita U14 boys following their 2-0 over Guadalcanal U14 boys.

Guadalcanal was rather slow in the start and were slowly picking up towards the end but was no match for Malaita who by then was in control of the game.

Western Province U14 boys finished third after beating Choiseul U14 in penalties.

The competition concluded with the awards presentation of the winning teams and the consolation prizes.

SIFF and Solomon Power thanked and congratulated the winners as well as all participating teams, coaches, officials and parents for working together and making the competition a success.