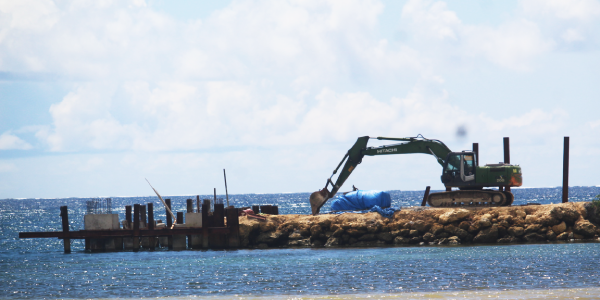 CONSTRUCTION work on the Malu’u Wharf in North Malaita has taken shape as the contractor is working to deliver the project within the given extended time-frame.

Malu’u Wharf is one of the many projects in the country funded under the infrastructure component of the national government’s Economic Stimulus Package (ESP) initiative.

A visit by this paper to the project site last week, found the construction company, Lion Heart, working tirelessly to deliver the project as expected of it.

As witnessed, the wharf nears completion with the final touches now being made.

This paper was told that the project was delayed due to land disputes.

With the rate of the work being undertaken, it is expected that the project will be completed before the end of this year.

Malu’u, which is the Malaita Provincial Government substation in the Northern region, has been operating without a wharf for some time now due to the poor state of the old wharf.

It is anticipated that when the construction of the wharf comes to completion, shipping services to Malu’u will resume and people travelling to the northern region of Malaita would not have to travel through Auki.

Meanwhile, another infrastructure project funded under the ESP infrastructure component in North Malaita- Taba’a Bridge-which was successfully implemented and delivered last year. It is now in service.