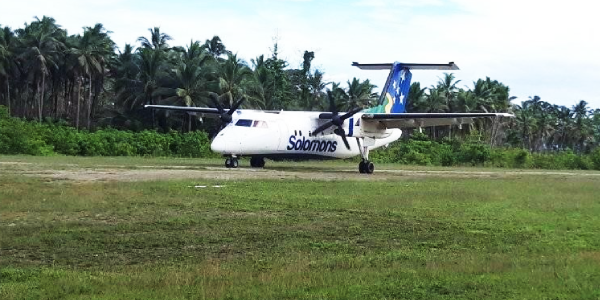 POLICE in Malaita Province have arrested a 37-year-old man on Saturday for blocking the airport runway at Gwounaru’u when a Solomon Airlines flight was preparing for departure.

A statement from Malaita Provincial Police Commander Leslie Kili said the man, who is from Gwounaruu Village was under the influence of liquour.

Mr Kili said the plane was preparing to turn into the runway when the man walked towards the plane and stopped it.

He said there is no motive behind the action.

He said the suspect has been released on police bail as investigation continues.

Meanwhile, Mr Kili urged the people in and around Gwounaruu Village not to repeat such action.

“I would like to remind our good people in and around Gwounaruu village that Solomon Airlines is providing transport services for us and we should not do such action.

“As PPC, I call on the public around Gwounaru’u that police will not tolerate such behaviour and call on chiefs and elders around the airport to warn their youths,” the provincial police commander said.