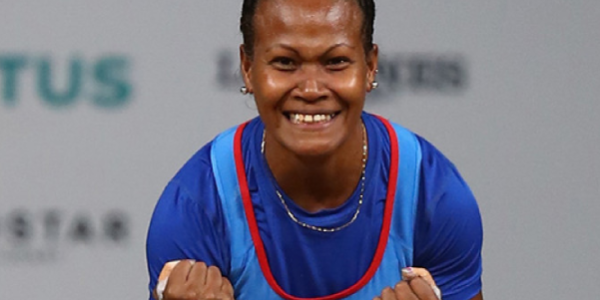 SOLOMON Islands national female weightlifter, Jenly Wini Tegu is confident to win a medal for the country in the upcoming Pacific Mini Games in the Northern Marianas.

Wini said preparations have been going well for her and she is very confident to achieve her goal.

“I am confident to win a medal at the Pacific Mini Games, whether it is gold, silver or bronze.

“My confidence can be attributed to the two months of intensive training which has helped me improve a lot.

“I have been working hard to reach this level of confidence,” she said.

Wini is currently attending a training camp in Australia for three months which started two months ago.

Her improvement can be measured through her recent competition over the weekend, finishing with a total of 195kg from her previous total of 180kg in the 55kg weight category.

Winning a medal has been Wini’s aim in nearly all weightlifting competitions and she has achieved it in most of her competitions.

The current Australian camp also marks the start of her journey for Birmingham, England for the 2022 Commonwealth Games.

Jenly is no longer competing in the 58kg category which she won bronze in the previous Commonwealth Games.

She will now compete in the 55kg category for the first time in the Pacific Mini Games and the Commonwealth Games.

She is also the only Solomon Islands athlete who has won a medal at the Commonwealth Games.

Meanwhile Wini thanked Coach Paul Coffa for supporting her throughout her trainings.