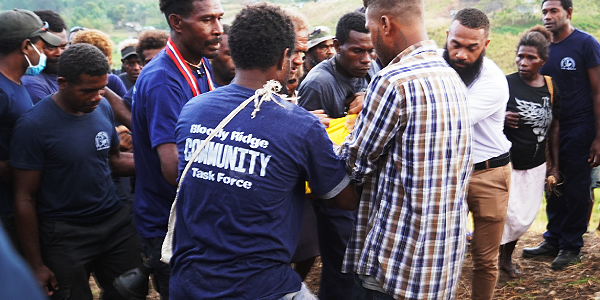 A YOUNG man is now in police custody after stabbing a Japanese military personnel attending a commemoration service of the Battle of Guadalcanal at Bloody Ridge just after eight this morning.

A Solomon Star reporter, who was at the scene, Eddie Lachlan said the incident happened during the speeches at the official part of the program.

Mr Lachlan said the victim was with the group of reporters attending the event and moved away to take photos when a young man in a yellow t-shirt stabbed him on the neck with a broken pair of scissors.

The victim was quickly taken away in an ambulance on standby at the site while the community task-force group handed the young man over to the police.

According to Bloody Ridge Community chief Wesley Ramo, the community had worked so hard to ensure the event is undisturbed.

“We formed a community task-force to ensure the smooth running of the program.

“Unfortunately, the community and our task-force’s effort is just a waste,” Mr Ramo said.

Bystanders claimed that the young man is cognitively impaired.

One bystander said the young man had been warned to stay away from the event because of his condition.

“We were shocked to see him walked straight up to the victim and stabbed him on the neck,” the bystander who was an eyewitness to the incident said.

Chief Ramo apologised to the Government of Japan on behalf of his community and also to the dignitaries who attended the service.

Ministry of Culture and Tourism permanent secretary Bunyan Sivaro had also apologised to those who attended the event at Bloody Ridge.

“I am really sorry for what happen.

“We are here to promote peace.

“What just happened will continue to paint a bad picture for Solomon Islands,” the permanent secretary said.

Meanwhile, the Royal Solomon Islands Police Force (RSIPF) said it is gathering information relating to the incident and will issue an official statement later.