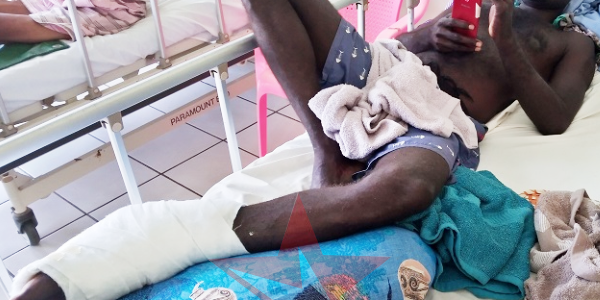 A MAN in his 30s from Rendova, Western Province has survived a crocodile attack at Retavo village by sticking his fingers into its eyes whilst fighting for his life.

Joel Kena told the Solomon Star on Monday that he was out diving early this month along the village coast for fish at around 5 pm in the evening when the crocodile approached and attacked him from behind.

The sudden incident occurred on Saturday 1st of October 2022.

The man was then rushed immediately over to the Gizo Hospital for emergency attention where he is currently undergoing medical attention.

Speaking to this paper in an interview at the Gizo Hospital, Monday, the father of one said, that he was still diving for fish in the sea when he was attacked by this saltwater crocodile. The monster is about six feet in length.

“I was still diving, when all of sudden without noticing the beast, it attacked me on the spot from the behind.”

He said, at first the crocodile grabbed his leg and so he turned around bravely, used his two fingers and struck its eyes that made the wild beast reduce its attack.

“After damaging its eyes using my two fingers, I dived down into water to see the crocodile because the surface of the water is filled with dirt and debris.

“I can still see the reptile following me down to the bottom of the sea and so I swam up again to the surface of the water to take a breath.

‘’While taking a breath, the crocodile attacked me again for the second time and so we fought with each other for several minutes.

‘’It was in the middle of the fight that I tried to use my fingers again to strike its eye. However, I could feel my whole body going numb,” he explained .

At the time, he claimed the crocodile already bit off part of his heel and the skin on his left feet.

‘’The wild beast just tore my feet and cause other injuries to my body. Because of blood loss and the way it grabbed me I was getting weak but stayed afloat on the surface of the water while the crocodile was floating beside me as well without any more attack,’’ Kena 35, the croc survivor expressed.

Very weak, he said, “I talked to the crocodile to leave me alone as I swam back to the shore using only my good leg.”

As he swam close to the shore, that’s when he yelled for help and the villagers came to his rescue as the crocodile escaped.

It was the quick action by the villagers that saved him where he was rushed to Gizo.

The survivor is still nursing injuries and undergoing medical treatment at the Gizo hospital.