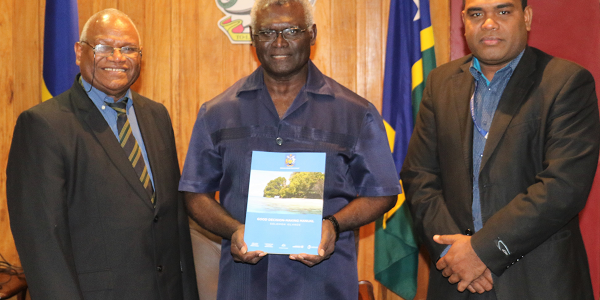 Handing over the Manual, the Ombudsman shared with the Hon. Prime Minister concerns about the high rate of bad decision-making in the public service generally.

He adds, it is the Ombudsman Office’s work to try and correct these bad decisions.

“The importance of the meeting with the Prime Minister this morning was to inform him that these things are happening, and some serious action must be taken to stop this resource wastage. We need to do that in order to save the resources to be used elsewhere in other urgent sectors of development,” he added.

There is evidence of bad decision-making throughout the entire public service, and despite the huge resources spent on good governance and its principles – transparency, accountability, training and advocacy, the evidence to-date shows little improvement in the decision-making of public officials.

He hopes, the Good Decision-Making Manual will become a compulsory knowledge and experience requirement for all senior managers in the public services.

Prime Minister Sogavare said, the problem of bad decision-making in the Public Service has been a major concern for the government.

He believes, the document will assist public officers make good and wise decisions to prevent unnecessary wastage of government resources while enabling the state to use the available resources on other urgent sectors of development for the good of our people.

The Ombudsman thank the Australian Government through DFAT, the Commonwealth Ombudsman of Australia and the Queensland Ombudsman for their assistance in the development of this document.

Mr Fakarii hopes to soon complete two other documents currently being worked on. One is a Complaint Management System Procedures for all government ministries and agencies to properly deal with complaints at the ministerial and agency level.

This will hopefully reduce the chances of minor and simple case which can be dealt with effectively and at minimum costs at the ministry and agency levels.