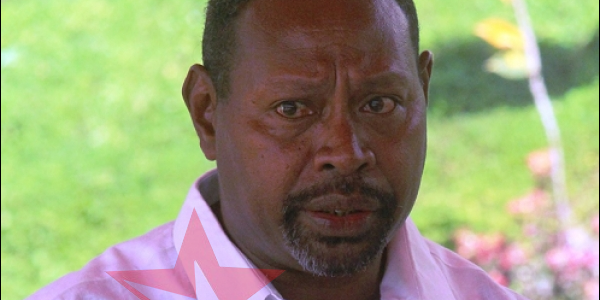 MEMBER of Parliament for Central Makira and Minister of Fisheries and Marine Resources, Mr Nestor Ghiro has handed over the Solar Panels, the Public Announcement System and Sports Trophies to his people of Ward 9 Villages of West Bauro in Makira Ulawa Province.

The Puira and Waita Churches are yet to collect their solar panels as they did not have representatives at the handover ceremony.

The three trophies worth $10,000 are a huge trophy for football and two medium sized trophies for netball and volley ball are for the Manita Games which kicked off competitions on Boxing Day.

And the PA system Mr Ghiro provided is for the Manita youths who can hire it out when big church events and fundraising efforts to raise money take place.

But Mr Ghiro urged the Manita youths to use the equipment properly.

Meanwhile, a representative of solar panel recipients, Iso Sunaone of Masidonia Village said the churches and clinics in the area will benefit greatly from the solar equipment because their church services and clinical operations will no longer be interrupted by lighting difficulties.

And the Chairman of Manita Anglican Parish Council, Alan Uta Sunaone thanked Mr Ghiro for the support he has towards the parish by donating the solar panel, which must be looked after properly as the Manita Church will use it, he added.

The brothers praised Mr Ghiro for the foresight he has shown towards his people.