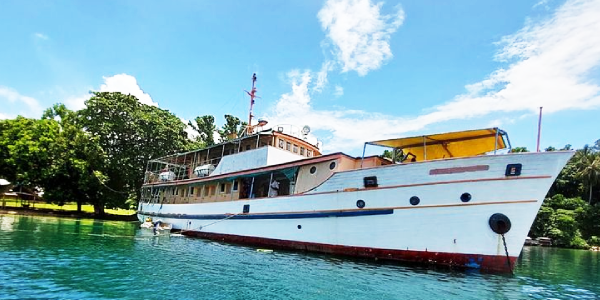 THE people of South Guadalcanal Constituency – Duidui, Vatukulau, and Talise wards – will now have a ship to address their long cries of lack of shipping services perhaps since independence.

This was revealed this week by Hon. John Stewart – MPA for Duidui Ward, who is instrumental in supporting Hon. Rollen Seleso (MP for South Guadalcanal) in negotiating the purchasing of the ship SBD$2.6M under the National Transport Fund.

According to Hon. John Stewart, once commissioned, the ship will be known as ‘MV. Southern Coast’, formerly ‘MV. Southern Cross’ under the Anglican Church of Melanesia (ACOM).

It will be managed under the business arm of the Constituency, the South Guadalcanal Corporate Service Company Ltd (SGCSCL).

GP Media understands that the SCG managed to win the former MV. Southern Cross through a competitive. The SGC was the highest against other bidder with SBD$2M despite the original value of ship at SBD$3.1M. However, SGC managed to negotiate the settled price of SBD$2.6M after their own team did a revaluation of the ship in Taroniara on Sunday 13th, 2022.

Hon. Stewart acknowledged Hon. Rollen Seleso for his determination and vision to purchase the former MV Southern Cross and that it will not only serve South Guadalcanal Constituency, but also East and West Guadalcanal.

He furthered “Duidui Ward used to be one of the biggest supplies of copra and dried cocoa beans in the past, but lack of any consistent shipping services, contributed drastically to the decline in the productions of these two commodities. Therefore, I hope that once the SGCSCL formalizes the management and policy aspect of it, we aim to provide the much needed services that most South Guadalcanal people have been denied of for ages”.

The good news is not only welcomed by South Guadalcanal constituents, but other Guadalcanal people after it’s been posted on the Guadalcanal Forum Facebook page online.

The Hon. Premier Francis Sade also sends his congratulatory messages. He writes “Congrats to our People of South Guadalcanal. Thanks Hon Seleso and the team”.

The soon to be ‘MV. Southern Coast’ is envisaged to contribute Guadalcanal Province’s shipping services at large.