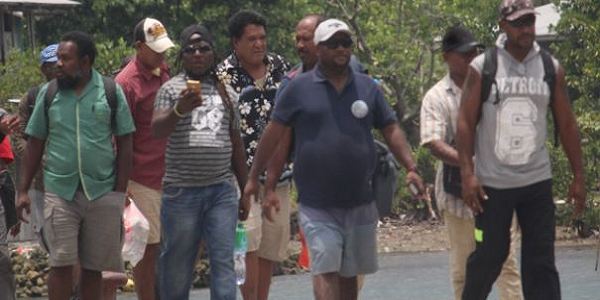 The opposition group which plans to topple the MARA led government disembarked at Auki wharf in Malaita Province on Monday afternoon under escort of some Malaitan ex-militants.

The arrival of the opposition group wishing to move a second motion of no confidence against Premier Daniel Suidani has sent a mixed reaction to the Malaitan public when they were escorted by ex-militants with links to Malaita MPs within the DCGA government, it was claimed.

It is not clear whether the ex-militants are armed or not.

Mover of the motion MPA for Ward 11 Elijah Asilaua and group arrived at Auki wharf via Pelican Express yesterday afternoon from Honiara ahead of the motion tomorrow.

The opposition group in the meantime claimed they have the majority support from the MPAs to topple Premier Suidani and MARA government when the motion is tabled tomorrow.

The public in Malaita yesterday observed in silence as the MPAs made their way out from Auki Wharf into waiting vehicles.

They are now camping at a location in Auki.

In the meantime, the Malaita public is building up on their support in Auki behind the MARA government with some vehicles carrying banners in support of Premier Suidani.

Some Malaitans have taken to social media posting pictures of the Malaita flag with slogans in support of the MARA government and their willingness to stand for Premier Suidani and MARA.

While Premier Suidani wants the date of the motion to be deferred to next month as there are other important business to deal with this week, Speaker Ronnie Butala insisted that the motion of no confidence must be tabled this week in a phone call to the Clerk.

Should the motion be tabled tomorrow, thousands of Malaitans are expected to fill Auki town to witness the event.

WALE WELCOMES EMPLOYMENT AND TRAINING OF LOCALS BY PRC AND CCECC
January 18, 2022
Go to Top