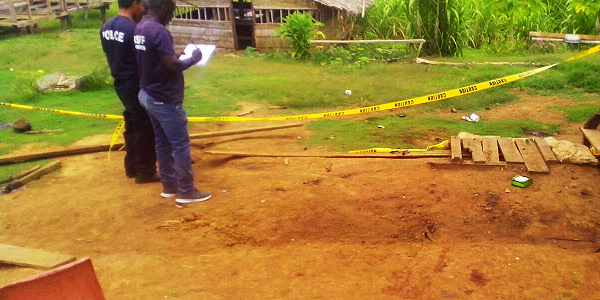 Initial report said that a family was preparing food for dinner. They lit a fire on a piece of roofing iron beside a piece of galvanised pipe 60mm in diameter and its thickness is 5mm. While the fire was burning, it heats the galvanised pipe and causes the explosion.

Officer in-charge of the EOD team, Inspector Clifford Tunuki says, “The EOD team and Forensic have responded to the incident and secured the scene. A father and son died after the explosion and a mother with the other son was in critical condition.”

OIC Tunuki says, “At the scene there was no crater or hole seen as a sign of a bomb blast. Thus it was highly suspicious that the galvanized metal pipe that was lying on top of the copper close to the fire which believed to have contained energized and highly flammable materials.”

“My condolence to the family and relatives of the deceased for the loss of their loved ones.”

“Investigation into the matter continues and I call on any one residing at the place of incident who may have any information to come forward to police. You can call the Police toll free line on 999 or any nearest Police Stations or you may call directly to our EOD mobile on 7495215,” says Inspector Tunuki.

No fire can destroy our relationship with God’
December 3, 2021

Opposition: Why Sogavare must go
December 3, 2021

Simmering differences are out
December 3, 2021
Go to Top