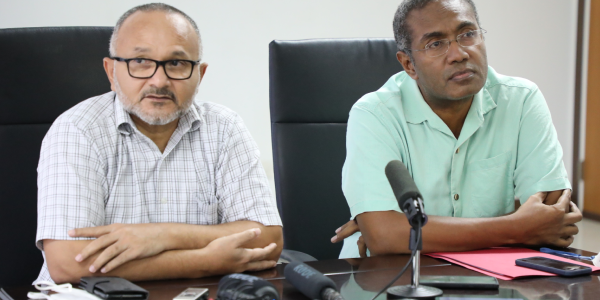 OPPOSITION MPs have categorically denied the Prime Minister’s statement in Parliament that they also support the extension of Parliament.

According to the Opposition side, this is an ironic example of what the Government has been preaching as ‘misinformation’.

In a statement today, the Opposition Leader reiterated the Opposition Group’s position that they will not support any move by the Government to extend the life of Parliament from 4 to 5 years.

Hon Wale said the Opposition will only support the first two options mentioned by the Governor General in his speech from the throne.

“Our position is clear. It is plainly expressed in the media and on the floor or Parliament. This is that we will only support the option of normal elections as per the Constitution, or an early dissolution of Parliament. Anything that suggests otherwise is a fabricated lie by the Prime Minister,” he said.

The Opposition Leader also reiterated the Opposition Group’s position that an amendment to the life of Parliament needs a fresh mandate from the electorate acquired at elections.

He said any other argument by the Prime Minister is his usual deceptive tactics.

“Unless the Prime Minister is suffering from memory loss or is not paying attention, this position has been clear from the beginning,” he said.

The Prime Minister should be well aware of the Opposition’s stand from debate speech from Opposition member and MP for East Are’Are Hon Peter Kenilorea Junior in Parliament yesterday.

According to Hon Kenilorea, election is the right for the people to vote in accordance with our Constitution.

‘The very first pledge in our Constitution is the agreement and pledge that our Government shall be based on democratic principles of universal suffrage and the responsibility of executive authorities to elected assemblies’.

“Universal suffrage is all about voting, and this was the very first pledge in our Constitution,” he said.

Hon Kenilorea said elections have its own cycle and it should be separate from any other peripheral activities or government policies.

He said the mechanics of amending the constitution can be done by the government with their numbers, but the fundamental purpose and universal suffrage must be upheld.

‘The Opposition’s group stance is clear. Without a clear mandate from the people during elections, Parliament must not be extended. Yet the sad irony is that the one place where the Government can get the mandate required for such a change is the thing they are trying to postpone’, Hon. Peter said.

The Opposition side calls on the Prime Minister not to mislead the public and to practice what he preaches.