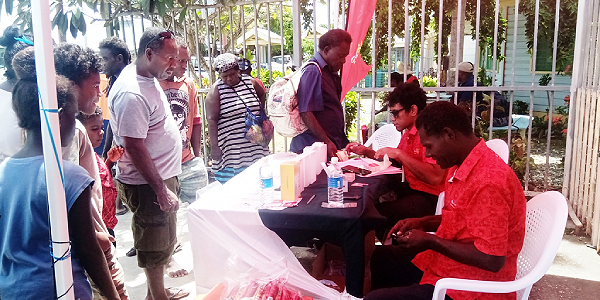 OUR Telekom is organizing a three-day outdoor mobile phone sales to members of the public in Gizo, Western Province since last week.

The outdoor sales commenced on Friday and will end today to coincide with the staging of the inter-island soccer championship which had been running for the past two weeks.

The outdoor sales continued on Saturday during the two semi-final matches.

Gizo was packed with people since the past week as a result of the two weeks soccer competition.

As the competition reached its climax late last week, the town was packed as supporters came in numbers to support their teams.

On Friday, Our Telekom sales team put on an outdoor sale in front of its office in Gizo which saw mobile handsets being sold at reasonable price for the rural customers.

Head of Our Telekom for the Western Region Kalwin Aquillah confirmed the outdoor sales as part of giving customers a chance to buy themselves a handset.

Aquillah said, the outdoor sales will end today (Monday) to coincide with the finals of the 2022 inter-island soccer championship.

Over the past two days a good number of customers have taken advantage of the outdoor sales to buy themselves handsets.

Gizo is expected to be packed today once again as the competition comes to an end.

Our Telekom is supporting the championship through the donation of the wining trophy.

It also helps to organize the event by supplying umbrellas.

During the half time of the semi-finals and the finals today they will also host number of activities for the spectators.

Winners get to win themselves prizes and merchandise from Our Telekom.