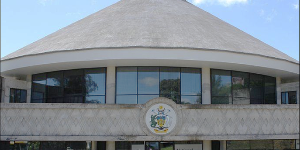 PARLIAMENT is currently on a two weeks special adjournment after its sitting on Wednesday.

The adjournment is to allow the government and the relevant officials and committees to finalise a number of Bills.

“I rise to move that at its adjournment from 10th August Parliament shall adjourn to Monday 29th August 2022.”

He explained the reasons for the adjournment are that a number of bills and businesses including the Supplementary Appropriation Bill and the Constitutional Amendment Bill to defer the 2023 election are before the parliament.

Prime Minister Sogavare said the Constitutional Amendment proposal was already tabled in Parliament and the adjournment will allow parliamentary processes to work through the areas requiring completion.

He added that the adjournment is also important to allow time for government officials to work and finalise the Truth and Reconciliation Commission (TRC) recommendation.

“Officials are looking at them now. That’s one of the businesses that need to be worked on,” he said referring to the TRC report.

The Prime Minister highlighted the importance of tabling the bills during in this current sitting.

The Opposition side also supported the special adjournment.

One of the bills that was passed this week is the  ‘Tax Payment System.’