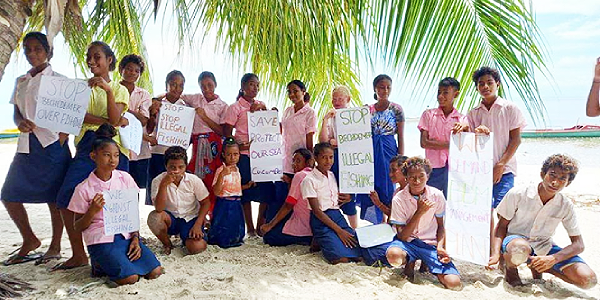 STUDENTS of Pelau Primary School in the Malaita Outer Islands have staged a peaceful protest against the over-harvesting of sea cucumbers and over-fishing in the atolls where people solely rely on the sea for their survival.

Some locals have been reported to continue harvesting the marine commodity, despite the closure of the beche-de-mer harvesting period on September 1 this year.

Solomon Star understands that the Polynesian inhabitants of Malaita Outer Islands rely almost entirely on marine resources for their basic daily survival and beche-de-mer is the major source of income. With the scarcity of vegetation on atolls, Malaita Outer Islanders rely on the income from their beche-de-mer sales to buy food and other basic livelihood necessities, including school fees.

This means the closure of beche-de-mer harvesting periods significantly impacts their livelihood.

However, students of Pelau Primary school on Pelau Atoll, one of the atolls in the Malaita Outer Islands appeared to have staged a peaceful protest against the over-harvesting of bech-de mer as well as over-fishing in the islands after the allowed beche-de-mer harvesting period ended.

Mr Makili claimed that despite the presence of police at the islands, some locals continued harvesting beche-de-mer after September 1, but the police took no action against them.

In his social media post which included the photo, Mr Makili stated, “School Children of Pelau Island in Ontong Java Atoll (Lord Howe Atoll) protested against the continuous harvesting of beche-de-mer in the islands after the closure of harvesting on 1st of September 2022.”

However, the police said they would not take any action, unless the Ministry of Fisheries and Marine Resources raises an official complaint.