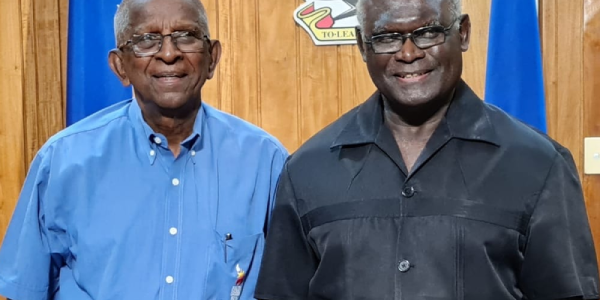 THE countdown to the November Pacific Games next year is ticking.

Solomon Islands is racing against time to complete most of the Games venues and facilities.

The question that may be running through the minds of many Solomon Islanders is whether work will be completed on time.

Last week a high-level delegation from the Pacific Games Council (PGC) was here in the country.

And the good news was that they were pleased with the progress being made so far.

PGC President, Mr. Vidhya Lakhan revealed this in Honiara after visiting parts of the venues and facilities.

Mr Lakhan and PGC Chief Executive Officer, Andrew Minogue were in the country last week to check on preparations for next year’s games.

While in the country they held a series of meetings with Government Officials and Games Organizers.

They also got the opportunity to conduct a site visit to all the venues and facilities.

Their visit was the first after two years since the COVID-19 outbreak and travel restriction.

The COVID-19 had also delayed work on all major games’ facilities in the country.

The delegation also met with Prime Minister Manasseh Sogavare and the NHA Board Chair.

From these meetings, it was clear that the commitment by the national government to get all the facilities done on time remains intact.

Thus, Mr. Lakhan said that he was indeed very happy with the work done, adding that preparations are on track.

“It shows the commitment of the Solomon Islands Government, the Prime Minister, NHA and GOC to ensure that work to get Solomon Islands prepared and ready for next year’s Games is moving ahead.

Mr. Lakhan highlighted that it is also very encouraging to learn that all venues and facilities for the Games should be completed before the end of May, 2023.

All the venues that they visited, have already made considerable progresses. And that’s good news.

Because of that work is on target and the country should be proud with the work being done so far.

Let’s thank our donor funders and contractors for the work being done so far to complete task in time.

Although there may be challenges here and there should be no more delays in the current work phase.

Only bad weather will be a cause of concern for the contractors.

Today, the first ever futsal home will be unveiled and thanks to the Indonesian government and this facility will add beauty to the sports city in East Honiara.

Many facilities are soon to be completed and let’s support the government and our donor partners for the work that have been made so far.

Let’s hope other projects like the Kukum highway, international airport upgrade and Tina Hydro projects are also completed by next year.

Because they also played an important role to the successful hosting this biggest sporting events in our shores come 2023.

Let’s get the work done on time and prepare to host the Games.