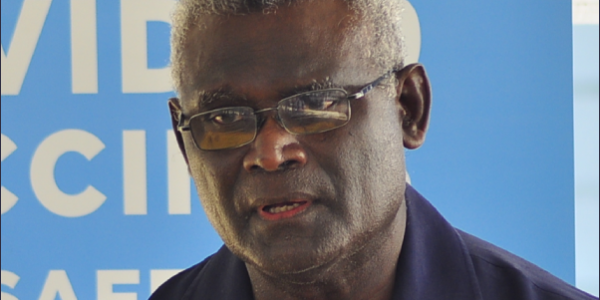 Urges Wale to rethink the motion

Prime Minister Manasseh Sogavare says losing one of his homes during last week’s unrest and being displaced will not deter him from stepping down.

At the same he told Opposition Leader Matthew Wale – the mover of the proposed motion of no confidence that his government is ready to face the motion.

“Therefore, you need to think first before moving the motion.”

PM Sogavare was speaking in Parliament yesterday during the motion to ‘Approve Authorization of Expenditure in Advance of Appropriation’ which was moved by Harry Kuma, Minister for Finance and Treasury.

PM told parliament he was also a victim of the burning incident in Honiara because he lost one of his homes and now being displaced.

“But that will not move me a bit on the calls that have been happening for me to resign.

“And for that we are prepared to face the vote of no confidence that the leader of opposition is raising.”

PM told parliament there is support for the government.

“Therefore you need to think first before tabling the motion come the time of the maturity of the motion,” PM Sogavare said.

PM Sogavare on Sunday has vowed to defend the principles of democracy will not bow down to the evil intention of a few people for him to step down.

He said the principles of democracy and the rule of law will must always be protected.

“I was elected as your prime minister to be a steward and protector of this very principle of which our democracy is built on and I will continue to defend it,” he said.

Parliament resumed yesterday morning less than a week of chaotic scenes that started around there before spreading into central and eastern parts of Honiara resulting in rioting and looting of shops, police stations, private companies and a school.

Wale announced on Saturday that he has filed a notice of a vote of no confidence in the Prime Minister.

Parliament Office has confirmed receiving the notice on Sunday.

The motion can be debated after seven clear days. This means it is likely to be debated early next week.

Meanwhile, Government has assured Opposition Leader and business houses that government will consider options to assist businesses that have been affected by last week’s anti-government protest resulting in mass rioting and looting in Honiara.

Prime Minister Sogavare yesterday said its a priority by the government to address the issue.

He said consultation is now underway with government’s partners to find solutions to assist businesses that have been affected.

Minister of Finance and Treasury Harry Kuma also told parliament reiterating the assurance by Prime Minister that they will last week’s civil unrest has forced the government to relook at its priorities and budget for next year.

He said support for businesses that have suffered from the civil unrest will be considered.