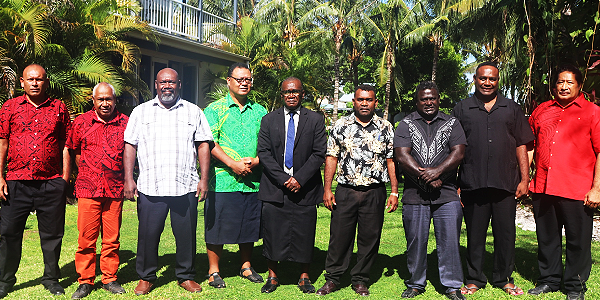 PROVINCIAL premiers have been challenged to be united in the face of the prevailing socio-economic challenges posed by the COVID-19 pandemic and to be firm.

Speaking during the official opening of the Premiers Meeting at Heritage Park Hotel yesterday, Minister of Provincial Government and Institutional Strengthening (MPGIS) Rollen Seleso urged the the provincial leaders to support the Sector Ministries in promoting and encouraging joint efforts to fight and contain the pandemic from attacking our communities, and economy.

He informed the premiers, the permanent secretaries from some key sectoral ministries, provincial secretaries, officials from MPGIS and Office of the Prime Minister and Cabinet (OPMC) that if the country ever seriously needed time to fight the pandemic and keep the economy afloat in the time of the current crisis, it is now.

“The Government’s urgent need now is to promote and encourage joint efforts from all sectors to fight, contain or even eradicate the presence of the virus in our country,

“Hence I call for cooperation, support and togetherness in the midst of the current crisis as these are tough times that we need each other in terms of support and prayers,” Minister Seleso pleaded.

The MPGIS Minister stated that he fully understands some of the issues the Premiers might want to raise during the course of the meetings but urges them to discuss amongst themselves pressing issues that they think the National Government should immediately address.

On the PCDF, Minister Seleso stressed that the MPGIS is fully committed to providing development budgets for the Provinces through the PCDF of the PGSP.

Minister Seleso thanked the premiers and their provincial secretaries for availing themselves for the important meeting despite their busy schedules.

The last time the Premiers came together in such similar formal gathering was in 2020 at Mendana Hotel during the early stages of the COVID-19.

Prior to that, Premiers normally meet in what is known as ‘Premiers Conference’ which was held in Auki in 2017.

The meeting will end next Tuesday.