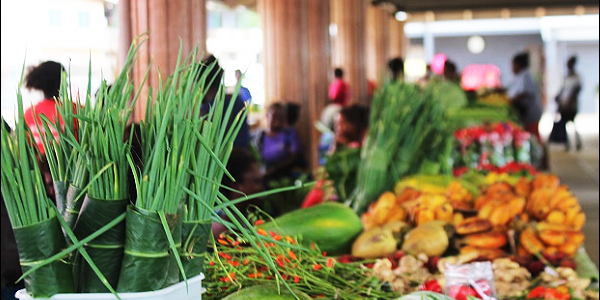 THE price of the fruits and vegetables being sold at the Gizo main market has taken a leap.

This came after the price of fuel has taken a jump early this month.

Because of this it had forced the rural farmers and market vendors from the neighboring islands outside of Gizo to increase their produces.

Most of the vendors depend on vehicles and outboard motor to travel to Gizo to sell their produce at the market.

To recover their expenses and make a small profit, the vendors have increased their prices.

As a result of the situation, Gizo residents will now have to dig deep into their pockets to shop at the market.

Speaking to this paper in an interview with the paper early this week, a Gizo resident said, theres a change in price in market produces and it is affecting the price of fruits and vegetables.

Maleli Yadao said;”its the price of fruits and vegetables that normally goes up even before the rise of fuel cost.

“I think in the context of Gizo town, there are not enough rural farmers and producers at the Gizo market even though market vendors are filling up the space at the market.

“Unlike in Honiara, there are too many local producers, and therefore, competition is high which leads to drop in prices for fruits and vegetables.”

He explained, for example, a single cucumber that costs $3 to $5 can only costs 50 cents up to $1 and up above in Honiara.

“And a $10 cucumber in Gizo can only costs $4 to $5 in Honiara. The same goes to other fruits like, guava, peanut, cabbage, mangoes, other fruits and few other root crops sold at the market,” he added.

The current fuel price now sold at Gizo is around $17 dollars per liter.

This means in many rural areas the price has jumped to more than $20 per litre.

A Shortland Islander based in Gizo said the rising cost of fuel is affecting many rural communities especially his people in the far west of Shortland islands.

“This is because Shortland Island is located far away from the main urban centers like Gizo and Taro in Choiseul Province.”

Use of outboard motor (OBM) is the main mode of transport in the two provinces.

This means the demand for fuel remains high.

“Our mark up price following the recent increase is between $30 to $40 per litre,” the man from Shortlands said.

The recent changes in fuel had also seen a change in taxi rates for Gizo and its surrounding communities.

Despite then cost a lot of people and residents of Gizo town continue to use taxi.

However, others decided to walk to and from home to work, school and to access other services.