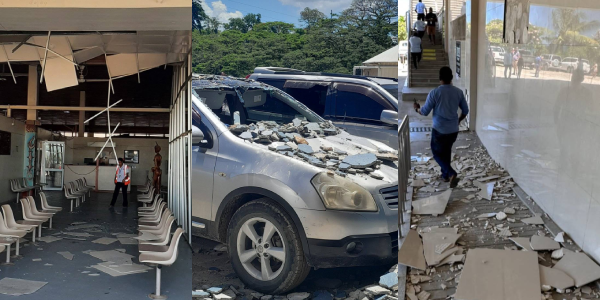 A quick assessment by CBSI sets the total cost of building damages in Honiara caused by last week’s 7.3 magnitude earthquake at $1.85million

THE 7.3 magnitude earthquake that struck Guadalcanal last Tuesday has left an estimated total loss of roughly around $1.85-Million from damages it caused to buildings in Honiara.

This is according to a quick assessment conducted by the Central Bank of Solomon Islands (CBSI) in the city.

“Costs related to physical damage to buildings was estimated at around $0.65 million and foregone sales by businesses approximately $1.2 million.

“Loss in productivity was also accounted for in terms of afternoon office closures in the government ministries and disruptions to businesses.

“Replacement and reconstruction costs of damaged buildings and infrastructures were not covered in this assessment. Thus, the total damage and loss costs are likely to be higher than the $1.85 million, once additional data becomes available.

CBSI said against the background of initial damage and loss assessment, the overall short-term and long-term direct impact of the earthquake on the economy is expected to be negligible.

It said in the short-term, the NDMO and some anecdotal evidence confirmed minimal casualties sustained as well as minimal damage to few households.

As for businesses, CBSI said the total damage was moderate and related disruptions were temporary for only a few hours.

“As a result, the long-term impact will be minor and is expected to have little or no ripple effect on future economic activity,” it added.

Nevertheless, CBSI said it is important that proper assessments be carried out by engineers on affected buildings to ensure their continued safety and stability.

Furthermore, it said the recent quake perhaps has provided the authorities the opportunity to relook and reassess the national building code and standards and amend accordingly to withstand such calamity.