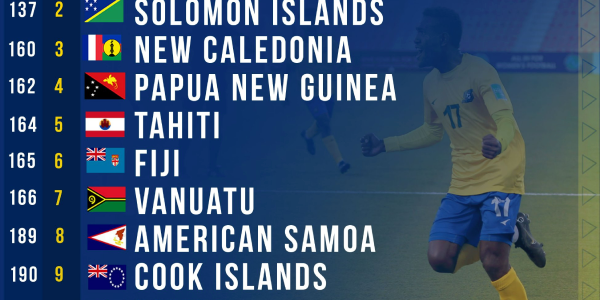 It is a jump of 5 places up, from 142, the recent position since the last ranking few months ago.

The ranking was released after the grand-final of the OFC World Cup Qualifiers in Qatar, between Solomon Islands and New Zealand.

In terms of the Oceania Confederation standing, Solomon Islands is still the second best behind New Zealand.

In the past decade, the ranking for the country has been a roller-coaster of stunning highs and confronting lows.

In early 2016, Solomon Islands was ranked 200 which was the lowest ranking reached since 1993.

At that time, Solomon Islands was sliding down the Oceania ranking from fourth place to ninth position. The further decline was due to the lack of participation in international matches.

Meanwhile, Brazil took over as the No. 1 team from Belgium, the first change as the top in three years.

The men’s FIFA World Ranking is a ranking system for men’s national teams in association football, currently led by Brazil.

The teams of the men’s member nations of FIFA, football’s world governing body, are ranked based on their game results with the most successful teams being ranked highest. The rankings were introduced in December 1992, and eight teams (Argentina, Belgium, Brazil, France, Germany, Italy, the Netherlands and Spain) have held the top position, of which Brazil have spent the longest ranked first.

A points system is used, with points being awarded based on the results of all FIFA-recognised full international matches. The ranking system has been revamped on several occasions, generally responding to criticism that the preceding calculation method did not effectively reflect the relative strengths of the national teams. Since 16 August 2018, the current version of the ranking system has adopted the Elo rating system used in chess and Go.

The ranking is currently sponsored by Coca-Cola; as such, The FIFA/Coca-Cola World Ranking name is also used. Coca-Cola also sponsors its women’s counterpart.