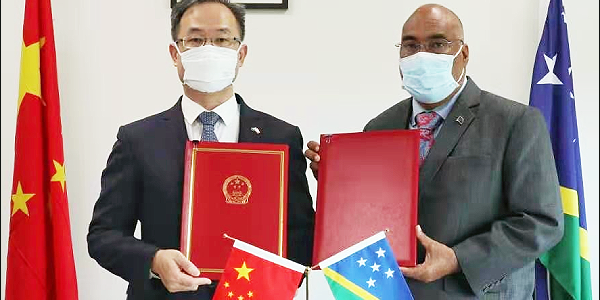 SOLOMON ISLANDS and China have signed the Framework Agreement on the controversial security pact, paving the way for security cooperation between the two countries, the Chinese Embassy in Honiara has announced.

Chinese Ambassador His Excellency LI Ming and the Permanent Secretary of the Ministry of Foreign Affairs and External Trade, Colin Beck, signed the Framework Agreement in Honiara, Wednesday.

“As two sovereign and independent countries, China and Solomon Islands are committed to normal law enforcement and security cooperation on the basis of equality, respect and mutual benefit, which conforms to international laws and customary practices.

“The cooperation is conducive to stability and security of Solomon Islands, and will promote common interests of other countries in the region,” the Embassy announced in a statement.

“The Agreement will further strengthen the bilateral cooperation between China and Solomon Islands in areas such as disaster response, humanitarian aid, development assistance and maintaining social order, to jointly address traditional and non-traditional security challenges.

“It will inject important positive energy and certainties into the security environment of Solomon Islands and the region as a whole. China-Solomon Islands security cooperation does not direct at any third party, and can complement with regional structures and other countries.

“Relevant parties are urged to respect sovereignty and independence of China and Solomon Islands on their bilateral security cooperation, and stop irresponsible smears and spreading misinformation.”

The initialing of the Framework Agreement is certain to inflame the paranoia, which has engulfed the corridors of powers both in Australia and the United States.

The spectre of war over nothing could not be ruled out.

A draft of the agreement, leaked to the public in the past week raised eyebrows in the United States and Australia, which was urged by people with links to the ruling conservative government “to invade Solomon Islands to force a regime change.”

Former Labor Prime Minister Kevin Rudd, this week blamed his country’s conservative government for creating a vacuum, which he said, had allowed China and others to exploit.