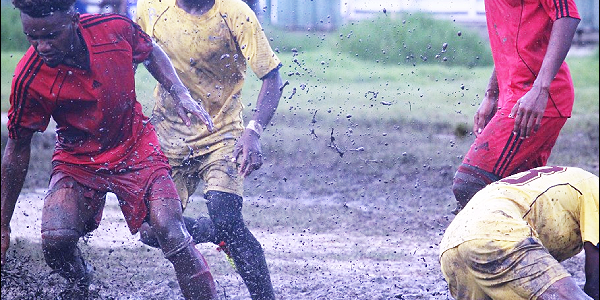 THE Sea Level rise as a result on the impacts of Climate Change has reportedly affected the recent Ward 30 Football tournament, held at Lalana community of the Aoke Langalanga electorate in Malaita Province.

The disaster has obviously caused disturbance to the flow of the tournament’s games and posing risk to the safety of players.

Speaking to one observer, he said the recent ward 30 pre-session league has faced difficulties throughout the competition as the playing ground seems to be flooded with rising seas.

He said the playing ground is now vulnerable to natural disaster such as sea level rise and rainy weather.

“We have experienced the sea level flooding the playing ground and this has posed great risk to the safety of players.”

“As I know, this is the only huge playing ground the ward 30 normally uses to host big tournaments,” the young players said.

“This playing ground needs to be relocated to a place that is safer from the rising impacts of climate change.”

He said the Association was set not only to host sporting activities but also to help address other issue such as education and climate change.

These are issues that have been experienced by the communities and its general populace, especially the young people that participated in the tournament.

He then assured the youths that these issues need agent consideration to address to allow their communities to enjoy its habitat.