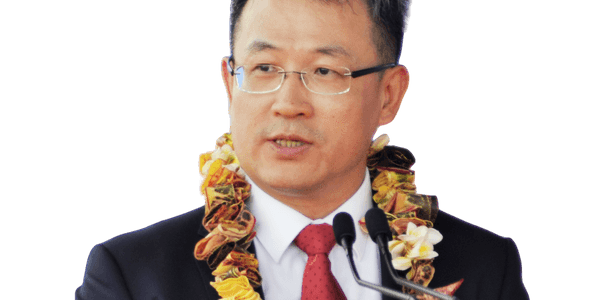 In his address to the invited guests only Year of the Rabbit Spring Festival (the Chinese New Year), China’s Ambassador to Solomon Islands, Li Ming, urged the adoption of the spirit of the rabbit, which he said symbolizes wisdom, courage, agility and vitality for the New Year.

An estimated 200 guests, including Prime Minister Manasseh Sogavare and his wife, Opposition Leader Matthew Wale, Cabinet Ministers, Members of Parliament, members of the Chinese business community and others attended.

“I am proud to say our bilateral relations has become a role model of relations between China and Pacific island countries. In Chinese traditional culture, rabbit is the symbol of wisdom, courage, agility and vitality.

“In the coming New Year, we should run quickly forward like rabbits, overcome all risks and challenges, and create a better future,” Ambassador Li said.

Ambassador Li also spoke about 2022, a year he believed was “unique for everyone”, expressing optimism about his country’s economic performance this year.

He also spoke of a number of projects that China engages in here in Solomon Islands.

“In China, the 20th National Congress of the Communist Party of China was successfully convened, General Secretary Xi Jinping was unanimously re-elected and China’s development plan for the next 15 years was outlined.

“China’s economy maintains a momentum of stable growth. The latest figure shows that China’s GDP in 2022 has increased 3 per cent and surpassed 17.9 trillion US dollars. A few weeks ago, China optimized COVID-19 prevention & control policy, and opens its border gradually.

“China’s economy is likely to see a robust rebound in 2023 and estimated to grow by 5 per cent. This will certainly provide more opportunities to the world. For example, many countries in Asia and Europe like Singapore, Thailand, Malaysia, Italy, Switzerland, Portugal, France warmly welcome Chinese tourists.

“When we get together here to celebrate, we are happy to see the relations between China and Solomon Islands has been growing from strength to strength,” he said.

“The Stadium and SINU dormitory projects to help SI host the 2023 Pacific Games progress well, and will be completed on schedule this year. China and Solomon Islands signed bilateral security agreement, and the Chinese Police Liaison Team provided training, helped receiving vehicles and equipment donated by China to SI.

“The first China Medical Team brought with it professional medical skills and Chinese traditional acupuncture, and are warmly welcomed by people of Solomon Islands.

That era ended in September 2019 when Honiara severed its ties with Taipei.

“I am proud to say our bilateral relations has become a role model of relations between China and Pacific island countries.

“When we look to the future, we should have full confidence. In 2023, China will embark on a new journey to build a modern socialist country, and Solomon Islands will be proud to host the most important regional sports event of 2023 Pacific Games. The most outstanding feature of China-SI relationship is based on equality, respect and tangible outcomes.

“In the new year, we should spare no efforts to elevate our relations to a new high, and bring more benefit to our peoples. After the COVID-19 pandemic, I look forward to more people-to-people, province to province, party to party, university to university exchanges, more direct trade and investment, more tourists from China to SI, more SI students apply for Chinese government scholarship, and more visits between the two countries to deepen mutual understanding.

“China-Solomon Islands relations has always received rock solid strong support of the Hon. Prime Minister Manasseh Sogavare, as well as Ministers of the Crown, Members of Parliament, Government officials, and all friends of Solomon Islands. I would like to take this opportunity to express my heartfelt thanks to you all once again.

“The Chinese Embassy will continue to provide best consular services to all of you.

And I also want to thank Master of Ceremony, Chung Wah school faculty and students for the wonderful lion dancing. Thank you, my colleagues and staff, for the hard work to organize the dinner tonight.

“On this festive occasion, I wish to extend, on behalf of the Chinese Embassy in Solomon Islands, the best wishes of Chinese Lunar New Year to all of you. Wish all distinguished guests and friends, good luck, peace, health, happiness, prosperity and bright future in the Year of Rabbit!