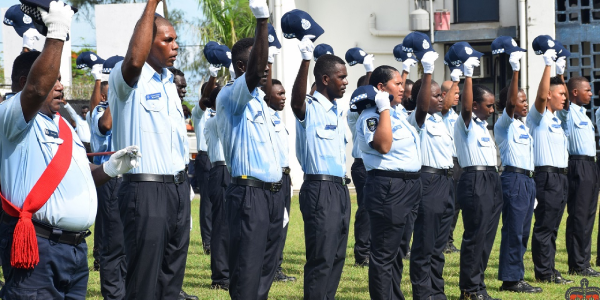 The graduates consist of 48 males and 17 females who were selected from different provinces. The patron of the recruit course is Honourable Patterson Oti, Speaker of the National Parliaments of Solomon Islands.

The recruit course ran for 19 weeks with intensive training and mentoring from the Police Academy. Five officers were discharged during the training due to disciplinary and sickness.

RSIPF Commissioner Mostyn Mangau in his remarks said, “There will be challenges that you will encounter in your policing career. One good example is wantokism culture where your integrity will be challenged and will make it difficult for you especially in your decision making.”

Commissioner Mangau adds, “Despite the challenges you will encounter, I urge each of you to be strong, courageous and to rise above the pressures and uphold the laws of this country in a fair manner.

Mr Mangau Said, “To be strong, courageous and to rise above the pressures and uphold the laws of this country in a fair manner. To do this, it requires personal discipline and uphold our organisation’s code of conduct at all times both on and off duty.”

He said, “I trust that you will build on what you have learned in theory at the Police Academy and put into practice when executing police duties at your work post during your two years’ probation period. I expect that during your probation period you will learn as much as you can in order to become an effective police officer.”

Permanent Secretary (PS) of the Ministry of Police, National Security and Correctional Services (MPNSCS) Ms. Karen Galokale in her speech says, “Over the past weeks of training, you have given your best and successfully completed many demanding hours of training. I am sure some of those hours were not pleasant as the course was quite intensive and had covered a total of 34 modules.”

PS Galokale says, “I promise you that those training sessions will really work your efforts when you are out on the field. The training will set benchmarks for you. It will guide you into your career. It will provide you with the tools to become efficient in the duties that you will perform, to become an outstanding police officer.”

Ms. Galokalo says, “Go out into our communities. Let citizens know that you are there to help them. During your probationary period, you will perform policing duties according to the laws of Solomon Islands.”

She adds, “Remember that you will be held to a higher standard. As police officers, you are expected to serve and protect the citizens of our community. Our national motto is to ‘lead is to serve’ and you fully comply with the humble sense of the motto.”

The patron of the recruit course is Honourable Patterson Oti, Speaker of the National Parliaments of Solomon Islands has encouraged the new graduates during the 19 weeks confinement.

The patron Hon: Oti says, “The learning does not stop here, it still continues with the opportunity provided by Australia and China. It is the start of a long process as your career as a police officer.”

Mr. Oti says, “The RSIPF is a discipline organisation and emphasises on employing well educated and matured officers. RSIPF is a command structured institution in which the orders govern the operation of its administration.”

The newly graduated officers will begin their 2 years’ probation period next week on stations throughout the country.