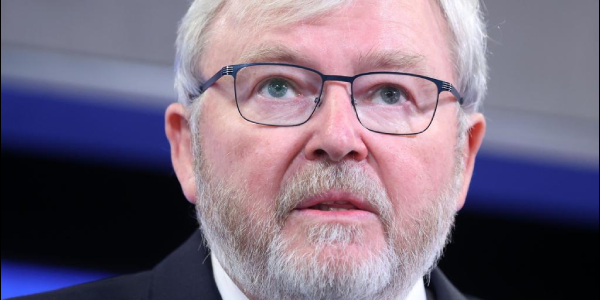 FORMER Australian Labor Prime Minister Kevin Rudd is accusing the Australian Government of creating a political vacuum in the Pacific region by neglecting their needs and concerns.

Mr. Rudd whose term as Prime Minister ended at the end of 2013 was commenting on a Memorandum of Understanding (MOU) on police cooperation China had signed with Solomon Islands.

He is promoting his book, ‘The Avoidable War.’

Former Police Commissioner, Frank Short, has covered the excerpt of the book on his website.

There are fears, particularly in Australia, the United States and New Zealand that China could also set up a military base as part of a broader deal.

“What is also being leaked apparently just now, however is a draft broader agreement which takes this level of police cooperation between the Solomon Islands Police Force and the Chinese Ministry of Public Security to a broader military agreement between the Solomons and China,” Rudd told Saturday Morning with Kim Hill.

“(This) would contain within it the possibility of Chinese naval visits, for the Chinese to engage in wider forms of military cooperating with the government of the Solomon Islands.

“From my own perspective this would represent a highly retrograde step in terms of peace and security and stability in the Southwest Pacific,” the former Labor Prime Minister said.

Mr. Rudd said much of the blame lies with the current Australian government led by Scott Morrison.

“The current conservative government of Australia has frankly had its eye off the ball when it comes to the South Pacific and Pacific Island countries more generally both on aid and on climate change policy, over a long period of time, creating therefore in the Pacific Island countries a growing strategic vacuum which made it possible for island states to turn to other countries like China,” he said.

Rudd said Australia also slashed the aid budget for the Pacific for several years after his term in office ended.

“When I left office at the end of 2013, our annual aid flows to the Pacific Island countries was something in the vicinity of about $1b per annum,” Rudd said, noting in subsequent budgets that was cut by “hundreds of millions of dollars”.

Australia has also been ignoring requests from the Pacific for help with climate change since 2013, Rudd said.

Rudd said that it was no surprise China was making moves.

“It’s a matter of logic that creates an opening for other countries beyond the region, including China, to begin to advance their interests in our part of the world.”

The Avoidable War, which proposes a mechanism to avoid catastrophic conflict between China and the US, called ‘managed strategic competition’.

A friend in Washington DC said yesterday that the draft security pact with China has everyone in the US Administration talking.

“Boy, you guys certainly got everyone’s attention here with your China security pact!,” he said.

Washington, he said, is now working on upgrading its diplomatic presence in Solomon Islands.