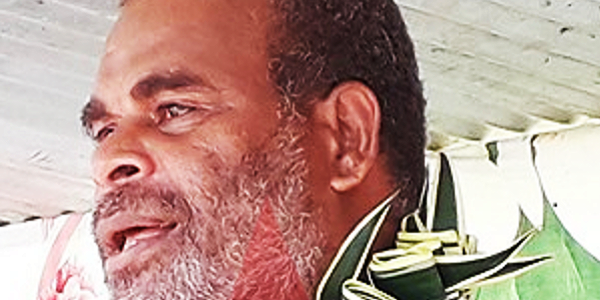 THE Speaker of the Malaita Provincial Assembly, Ronnie Butala, escaped what he claimed was a kidnapping attempt at sea on his way to Honiara yesterday.

The incident was allegedly ordered by Premier Daniel Suidani and through the Provincial Police Commander (PPC), Stanley Riolo, the Speaker said.

Mr. Butala from East Kwaio told Solomon Star yesterday a private speed boat was hired to give chase and to stop the commercial and passenger boat, MV Tahimareho which was traveling to Honiara from Auki.

The Malaita Speaker was a passenger on the MV Tahimareho.

“There were seven men in the private speed boat, including three police officers. Their intention was to stop the MV Tahimareho outside the Alite Reef off Auki and to take me back to Auki,” Mr. Butala said.

Despite using a 75hp Yamaha OBM, the speed boat was unable to stop the MV Tahimareho until it got close to Ngella, when it circled the larger vessel and boarded it.

“They all came onboard the MV Tahimareho and I asked them why they had come. Their response was that it was an order by Premier Daniel Suidani through the Malaita Provincial Police Commander, Stanley Riolo.

“The Premier wanted me to return to Auki to conduct a swearing-in ceremony for his new Ministers,” Mr. Butala told Solomon Star.

“I was in Auki all day on Monday but neither the Premier nor the PPC had contacted me about the swearing-in ceremony. Their action on the MV Tahimareho was truly criminal and pretty shameful to me and my Office as the Speaker.

“As a matter of fact, my clerk and I were in my office until 6pm on Monday evening. Why didn’t the Premier whose offices are only about 40 metres from mine, contact me about the swearing-in if he thinks such a ceremony is so important?

“The other point which I wish to make is that the Premier and the PPC knew full well that a motion of no confidence in the Premier has been filed and that should discourage them from attempting a swearing-in ceremony.

“Neither of them has given me or my Office the respect it deserves. Culturally, I am a Kwaio leader and they should respect that as well,” Speaker Butala said.

“I am calling on the Premier and PPC Riolo to apologise to me and my Office. What they did to me in front of so many people on the ship was truly shameful. I felt as if I were a criminal, especially when police officers were involved.

“I am not a criminal.

“I am the Speaker of the Malaita Provincial Assembly. My role is to perform my duties in accordance with the rules and regulations and the procedures these regulations demand,” he said.

Speaker Butala said he refused to return to Auki with the seven men for safety fears and he does not really know who the men really were.

“What they did yesterday did not look right to me. The police officers involved should be disciplined immediately.”

It is understood the Speaker is preparing a formal complaint to the Commissioner of Police on the incident.

Speaker Butala said the men were not armed when they boarded the MV Tahimareho.

“They probably had arms in the boat but I do not know. They were certainly not armed when they all came onboard the MV Tahimareho.”

Meanwhile, outspoken Malaita Community leader, Charles Karaori, has urged the national government to go easy on the situation in Auki, saying he feared bloodshed especially on the outcome of the vote on Wednesday 27th October 2021.

“It is a well-known fact that both the national and Malaita provincial governments are run and controlled by rebels. Can you imagine when they confront each other on the day?

“This is why I am saying the national government should take a cautious approach in addressing the situation in Auki, not necessarily on Malaita.”

Premier Suidani yesterday had to engage a Commissioner of Oaths to conduct the swearing-in ceremony.