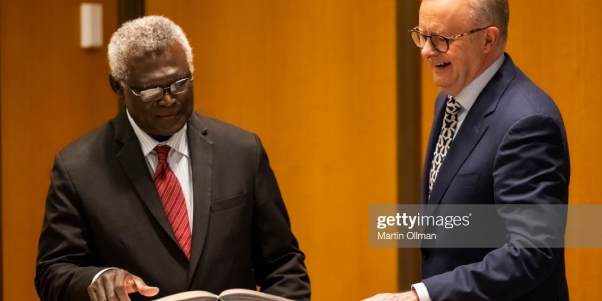 PRIME Minister Manasseh Sogavare was told by the Australian Prime Minister Anthony Albanese, that Australia wants to be the partner of choice for Solomon Islands and that it regards pacific regional security as critical.

The two counterparts held bilateral discussions in Canberra on a seven-hour stopover in the Australian Capital Territory as Prime Minister Sogavare returns home after attending the 77th UNGA and the Biden-Pacific Leaders’ Summit.

The bilateral talks held at the invitation of Canberra was the first meeting that Sogavare had with his Australian counterpart after slamming Australia’s offer to fund the 2023 National General Election, describing it as an “assault” on Solomon Islands democracy and an attempt at foreign interference.

It said Prime Minister Albanese responded warmly to Sogavare’s remarks. “I thank you for your clear and unequivocal commitments. They are the commitments of a friend and I look forward to the dialogue,” he said.

“Like families we won’t always agree on every single item, but what we will agree on is … pursuing common interests wherever we can. Australia regards us as very much wanting to be partners of choice [for Solomon Islands],” he said.

“We regard security in our region as being critical, and we also regard the need to uplift the living standards and quality of life of people in the Pacific as being absolutely critical.”

ABC also reported the Australian treasurer, Jim Chalmers saying ahead of the bilateral discussions between the two prime ministers that Albanese will discuss important regional issues amid concerns about the Honiara-Beijing relationship.

He said such concerns include threats to ban foreign journalists critical of the Chinese government.

Dr Chalmers told reporters before the meeting that the face-to-face was “an important opportunity … talk about all of the issues we confront”.

“You can anticipate from that challenges in the region and the broader geopolitics that we all confront, particularly in our neighbourhood, will be something they’ll discuss,” he said.

Prime Minister Sogavare and his delegation are due back in Honiara tomorrow.