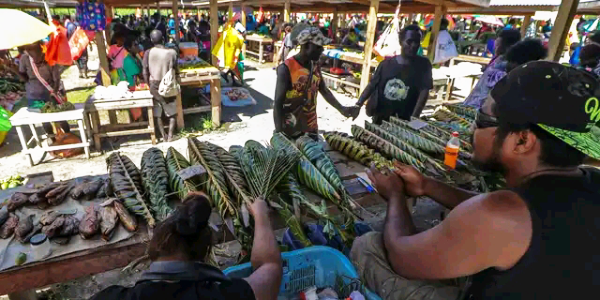 This had taken a jump following the opening of the international border in July last year.

This means people of Shortlands island have earned alot of income through selling produces in exchange for money that is sold and bought on PNG currency (Kina).

Reports reaching this paper yesterday said, the villagers from Gaomai, Toumoa, Harapa, Maleia and other areas in Shortlands now frequently visited Buin town and Arawa since the demand of smoked fish and other product are very high at the moment.

Chief Alisae said this not new but they are so happy and excited that they experience their marketing activity this year compare to the past is better although some internal challenges they face.

But the access to service and livelihood for people is what really matters.

“Our people have crossed over to Buin Market to sell their produces.

This is the only way that allows them to buy goods from the shops and later traveled back by boat to Shortland Islands,” he said.

“Especially Fish and other products from Shortland Islands are in abundant supply.

”We have enough and rich resources from marine and garden produces.

”However, people at Buin in Buka mainly buy our smoked fish.

”That is their main food and we earned a good money out of it,” he said.

Shortland people have blood relative there in Bouganville in which they are connected since in the past.

The trading system which is the barter system is a common practice in the past.

A fisher man from Gaomai in Shortland that is located close to Buin Town said, that selling their products there is much convent than Gizo where the purchasing power is far more better than Gizo the provincial capital of Western.

The fisherman said that is why they travel to Bougainville just a few minutes boat ride to sell their smoked fish and other products in return for cash to buy goods from the shops and purchased other basic necessity and school fee for their children as well.