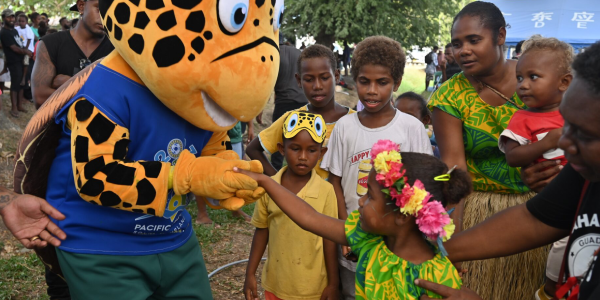 SOLO the 2023 Pacific Games Mascot has resumed its nationwide tour this week.

This was confirmed by the Games Organizing Committee (GOC).

Solo the Mascot will be heading to Malaita Province as its first province to tour for this year.

Solo will then travel down to Temotu province and will wrap up its nationwide tour with a return to Malaita towards the end of February.

These are the only two provinces left for Solo the Mascot to tour.

Upon completion of the Mascot tour to these two provinces, the GOC Community Engagement program will then launch its Ambassadors tour in March.

Solo and the team have so far visited a total of seven provinces including Honiara throughout last year.

They have visited more than from these provinces.

Since August of last year, Solo’s nationwide tour of Solomon Islands has reached down far as to Shortland Islands in the west and to Makira /Ulawa province in the East visiting more than 80 communities and 40 schools.

It is also aimed at engaging all Solomon Islanders to feel connected to the Games and to ensure people know how they can be involved and engaged with the Games.